THIS IS an important portion of We Are Collective’s article: “Contenders, Cheats, Opportunists and Turncoats: Marcos, Robredo, Cayetano, Pimentel and the Battle for 2022” dated September 11, 2017:

A BBM-Duterte Tandem for 2022 is the only way to ensure we don’t go back to square one.

And if BBM’s opponents succeed (and we’re not just referring to Leni and the LP), what assurances do we have that things are bound to change? None. As we keep on repeating on and on ad infinitum – we’ll be back in the same shit pile we tried so desperately hard to crawl out of.  Unless we step up and intervene now. 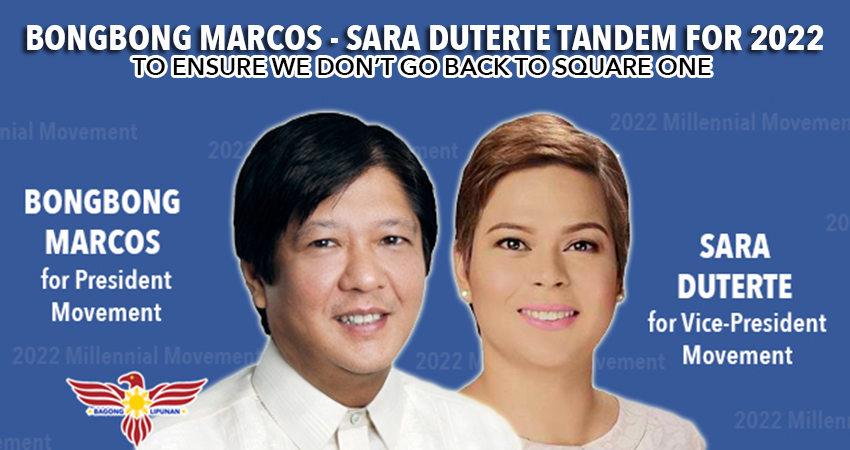 Yes things are definitely shaping up in preparation for 2022.

No different from what happened back in Aquino’s time, when everyone was jockeying to secure the best deals for 2016.

Duterte seems to have the numbers. But those below him are putting their interests first before anything else.

If Leni is out, who benefits?

The most obvious case in point, her arch-rival and top 2022 presidential contender, BongBong Marcos.

The main contenders as of now are Marcos and Leni.

But Alan Cayetano is jostling his way in. And Alan has his own cabal within the Duterte administration.

Another potential group is PDP-Laban. It remains to be seen who this group will most likely toss up. The ambitious Koko Pimentel might join the fray (though he lacks the political capital to be a serious contender) but like Alan Cayetano, Pimentel will never side with Marcos. There is an even bigger chance of Pimentel teaming up with Leni Robredo and the LP (his real bosom buddies) than there is a chance of himself warming up to a Marcos presidency. And Koko has a political ace up his sleeve in the person of Rudy Fariñas, a guy who is just as ambitious and politically savvy who hates the Marcoses just as much as the two aforementioned personalities.

There is much animosity between Alan and Koko (as exhibited by their recent rivalry over the Senate Presidency post), but they share the same disdain for the Marcoses. Which means that they share the same interest in keeping Marcos out. They did it with Trillanes when they teamed up against Binay, they can always do the same thing now.

When it comes to congress, Alvarez is just a figurehead.

Fariñas is the one who wields power.

He’s the real Speaker of the House.

He controls majority of the congressmen. Having been a former LP stalwart himself.

Politically, it constitutes tremendous leverage – as congressmen are capable of mobilizing local support for national candidates – machinery and all.

Marcos’ supporters are saying Fariñas is doing all this to benefit his family locally. His daughter Ria is said to be running for governor in Ilocos Norte.

The truth is, Farinas’ leverage does not emanate from Ilocos.

Ilocos is Marcos country and no matter what he does, he will never defeat the Marcoses in their own turf.

Hence the demolition job against Imee, and the latter is apparently retaliating by exposing Farinas’ own dirty laundry.

Fariñas’ strength comes from his position in Congress.

And both Pimentel and Cayetano are using it to their advantage.

They both want to be president someday. Cayetano is Nacionalista and seems to have Villar’s backing (although Villar would be quick to deny this by saying that Marcos is likewise a Nacionalista, though the latter is very much independent logistics wise. Playing safe and benefiting silently seem to be the Villars’ recently acquired talent). Both Cayetano and Pimentel must have brokered a deal with the Villars when they arranged for Mark to get the DPWH post when President Duterte won. And a Pimentel presidency, however far-fetched, will be extremely friendly and accommodating to the LP folks, as is clearly demonstrated by his leniency when it comes to his colleagues in the Senate who are aligned with the LP.

Now those people who are claiming that Farinas’ beef with the Marcoses is purely local are missing the big picture. This shit is national. Destroying Marcos and derailing every chance of them making a comeback will have national repercussions.

What’s saddening is that these people are not really interested in cleansing the country of its dregs.

Which makes them no different from the kind of politicians we despise.

Could be brokering deals with Leni’s camp.

Sort of a Plan B.

All to prevent a Marcos comeback from happening.

Either they’re joining forces now vs. Marcos then they’ll fight each other later as they did with Binay, or

Leni withdraws in support of either of them in exchange for immunity from suit and prosecution.

Or Alan and Koko can practically team up for 2022 with the support of Leni and the LP bloc behind them.

This explains why Cayetano, Pimentel, Fariñas et al are all silent when it comes to the Leni Robredo issue. Why nobody seems interested in picking up the allegations we have been throwing against Leni, no matter how serious they seem.

And the impeachment complaint against Leni in Congress is not gaining any traction. Because Rudy Fariñas is there. And in case congress decides to endorse an impeachment rap vs. Leni, this could be a strategy no different from Conchita’s case vs. Noynoy.

A deliberate ruse. An engineered sham meant to keep Leni from getting impeached in the next several years.

They impeach her now, it won’t prosper since they’ll rein in the congressmen. And the impeachment ban will take effect.

So Leni is temporarily secure just like what happened to PRRD now.

The big question is: Where does President Duterte stand amidst all of these? A potential dark horse could be Sara Duterte herself entering the race in 2022. And this could be a definite game changer since the Duterte brand has the capacity to neutralize any and all opposition if it continues to be popular until 2022.

THIRD, you have BBM’s Electoral Protest Case against Leni.

BBM’s protest case against Robredo is likewise a game changer. It will shift the political dynamics to favor the one who wins.

Marcos may not have the numbers now, since he ran his campaign much like Rodrigo Duterte, without the help of a lot of local political bigwigs outside their turfs of Ilocos and Davao, but all this is bound to change if he wins the electoral protest case and gets proclaimed as the rightful VP instead of Leni Robredo.

This will put him in a very unique position to claim the presidency in 2022, but BBM has to play his cards right. In our opinion, he has to ally himself with a powerful political force that will definitely boost his presidential prospects – and so far, given the present political landscape, only the Dutertes can offer what he needs. That is, if Sara will be willing to run as his VP instead of preferring things the other way around.

Only a Marcos-Duterte tandem will effectively demolish what remains of the LP and provide the much needed political stability in our country.

Now Leni on the other hand, is doing everything possible to delay the recount. She’s guilty as fuck. And she knows damn well that if BongBong’s case prospers and she is revealed to have benefited from massive electoral cheating which resulted in her victory, that’ll be the end of her.

The only chance she has in redeeming what remains of her limited political prospects lies in delaying the protest case until it becomes moot and academic by 2022. But what happens if a decision is reached before 2022 and Leni loses?

However, if Leni resigns before the recount, that only means one thing.

A deal has already been brokered.

Leni resigns, then withdraws from the race in exchange for protection and her possible support for any of the contenders.

No different from what happened to Binay, albeit under different circumstances.

Binay has not been prosecuted because his group supported Duterte.

Binay’s group = the fake minority in Congress headed by Suarez and Lito Atienza.

But then again in Philippine politics, nothing is set in stone. Everything can change in the flick of a finger. And any change in the political dynamic can significantly alter alliances and prospects.

So even if she resigns, Leni still has value after all. She can still use her position as LP figurehead to throw her support behind Marcos’ opponents.

And that, ladies and gentlemen, is why nobody in both houses of congress seems keen in prosecuting or impeaching her right now.

Leni is being weaponized against a Marcos revival. Even her impeachment is being used as leverage to broker deals and concessions. And it all points to 2022.

And if BBM’s opponents succeed (and we’re not just referring to Leni and the LP), what assurances do we have that things are bound to change?

None. As we keep on repeating on and on ad infinitum – we’ll be back in the same shit pile we tried so desperately hard to crawl out of.

Unless we step up and intervene now.

A BBM-Duterte Tandem for 2022 is the only way to ensure we don’t go back to square one.

This is why everyone who shares the same perspective must definitely organize now. 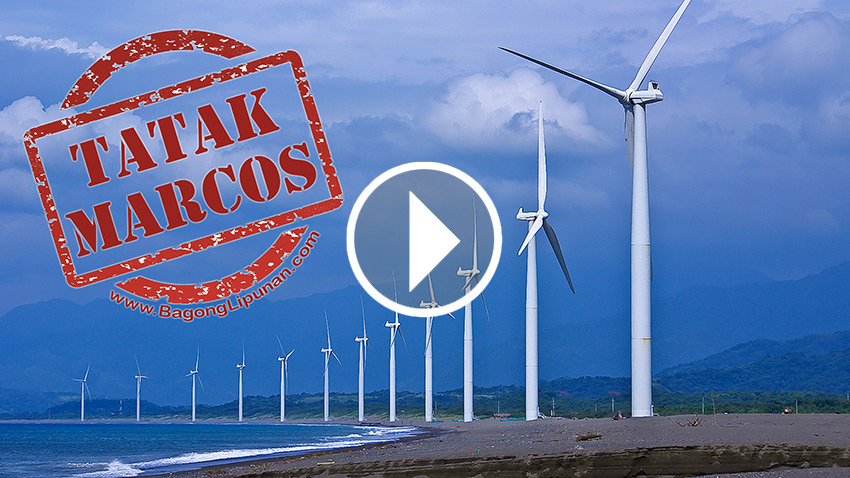