The Coconut Palace, also known as Tahanang Pilipino (lit. Filipino Home), is a government building located in the Cultural Center of the Philippines Complex, in Manila, Philippines.  The palace was commissioned in 1978 by former First Lady Imelda Marcos and was completed in the same year.  It is used as a government guest house.  It cost 37 million Philippine pesos to build. It is owned by the government-owned and controlled corporation the Government Service Insurance System (GSIS).

The Coconut Palace is made of several types of Philippine hardwood, coconut shells, and a specially engineered coconut lumber apparently known as Imelda Madera. Each of the suites on the second floor is named after a specific region of the Philippines and displays some of the handicrafts these regions produce. The palace is located on F. Ma. Guerrero Street at the Cultural Center of the Philippines Complex between the Folk Arts Theatre and the Sofitel Philippine Plaza Hotel. Before becoming the official residence of the Vice President, the palace was used for wedding receptions. 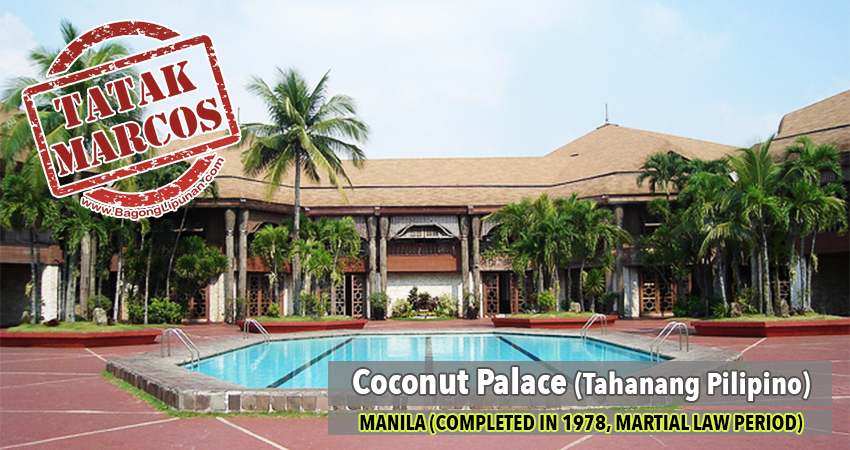 The palace is shaped like an octagon (the shape given to a coconut before being served), while the roof is shaped like a traditional Filipino salakot or hat. Some of its highlights are the 101 coconut-shell chandelier, and the dining table made of 40,000 tiny pieces of inlaid coconut shells. Highlighted as one of the Cultural Center of the Philippines’ most striking structures for its architecture and interiors, the palace celebrates the coconut as the ultimate “Tree of Life”. From the coconut’s roots to its trunk, bark, fruit, flower and shell, the palace’s design, form and ornamentation echo these elements.

The Coconut Palace has been a guesthouse for many guests, including Libyan leader Muammar al-Gaddafi, Brooke Shields and George Hamilton.

The palace has seven guest rooms named after Philippine provinces: