February 12, 2017 Catalyst Crime Prevention, Did You Know That (DYKT) Leave a comment

Death by electrocution to rapists during Marcos time 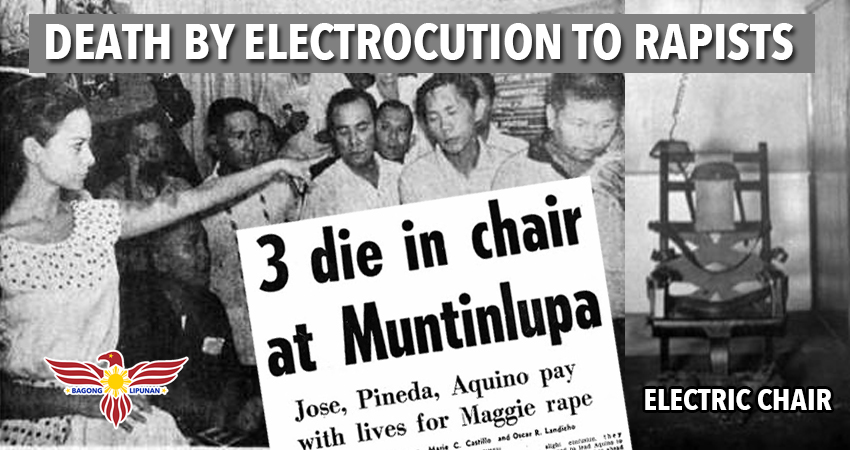 Maggie de la Riva identifies two of the culprits just five days after her gang rape. Talk about facing your accuser; according to the accompanying article, “the frail-looking mestiza was a picture of righteous indignation as she extended her arms, showed her bruises, and asked Pineda, pointedly: ‘Do you remember these?’” 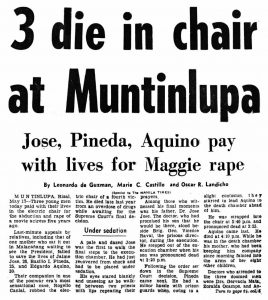 Muntinlupa, Rizal, May 17— Three young men today paid with their lives in the electric chair for the abduction and rape of a movie actress five years ago. Last-minute appeals by relatives, including that of one mother who sat it out in Malacañang waiting to see the President, failed to save the lives of Jaime Jose, 26, Basilio I. Pineda, 25, and Edgardo Aquino, 30. Their companion in one of the postwar era’s most sensational case, Rogelio Canial, robbed the electric chair of a fourth victim. He died late last year from an overdose of drugs while awaiting for the Supreme Court’s final decision.

A pale and dazed Jose was the first to walk the final steps to the execution chamber. He had just recovered from shock and had to be placed under sedation. His eyes stared blankly and unseeing as he walked between two priests with lips repeating their prayers. Among those who witnessed his final moments was his father, Dr. Jose Jose. The doctor, who had promised his son that he would be there, stood beside Brig. Gen. Vicente Raval, the prisons director, during the execution. He stepped out of the execution chamber when his son was pronounced dead at 3:20 p.m. Following the order set down in the Supreme Court decision, Pineda came next. He had a minor hassle with prison guards when, owing to a slight confusion, they started to lead Aquino to the death chamber ahead of him. He was strapped into the chair at 3:40 p.m. and pronounced dead at 3:55.
Aquino came last. He died at 4:10 p.m. While he was in the death chamber his mother, who had been keeping him company since morning fainted into the arms of her eight other children Doctors who attended to the three doomed men were Drs. Gervacia Mata, Zoraida Ocampo and Aurelio Alcantara for Jose; Avelina Alcantara, Ester Cordero and Luz Alma Santos for Pineda; and Argente Alejandrino, Luz Enriquez and Avelina Alacantara forAquino.

Three anesthesiologists— Drs. Ricardo de Vera, Leonida Panopio and Bautista Placino— administered to the three doomed men. The three convicts were transferred from the prison hospital to the anteroom of the death chamber at midnight yesterday. There they were kept company by weeping relatives. At 7 a.m., the death sentence was read to them, after which they had breakfast of fried chicken, bread and coffee. Except for the request that their heads be shaven at 10 a.m. instead of the usual right after breakfast, the prisoners’ only other request was for some friends in the death row to be brought to them. This request, however, was not granted, because of a near-riot earlier in the day.

For lunch, their last meal, the prisoners had kare-kare, chicken tinola, lobsters, crispy pata, lechon, fried lapu-lapu, and ice cream. Jose hardly touched the food, although a sister dutifully spoon-fed him. Pineda ate his meal with his estranged wife, sisters and other relatives Aquino tried to cheer up his mother by offering her food and hugging her. While the convicts and their relatives prayed at about 1 p.m., inmates in the nearby cells started singing Cursillo songs and praying aloud.

Then, at about 3 p.m., silence descended on the whole prison compound and nothing was heard except the plaintive song from a convict in some cell. “Mama, I’ll miss the days when you were here beside me…” Inside the execution chamber, the death sentence handed by then Judge Lourdes San Diego of the Quezon City court of first instance, the Supreme Court decision and the final presidential reprieve for 60 days was read in succession by General Raval. The general then turned to the justice department’s representative in the room to ask if there was any word from the President. Told that there was none, he ordered the first prisoner to be brought in.

To continue reading the article, click the image below. 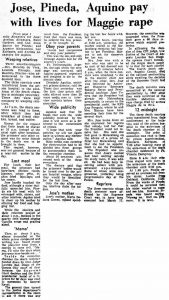