The proceedings were tense; or should I say, shameful?

There were vigorous speeches against the provision by Justice Barrera, Gary Teves and Leonie Garcia. The whole Convention looked with admiration at these three musketeers who have displayed their guts by speaking against what is a foreordained provision and, in so doing, were taking the risk of incurring the wrath of the political gods.

There were many more minor skirmishes. The one thing that sticks to my mind is the fact that insofar as talking or reasoning with the majority was concerned, it was like talking to a wall. There was absolutely no way for them to accommodate another view. They were determined to ram through whatever they had decided.

Teroy Laurel made a brilliant defense of his proposed amendments to the draft. We should not limit membership to the National Assembly to the delegates who would opt to serve, as was provided for in the draft, because this was really making the thing a mockery; it was humiliating. 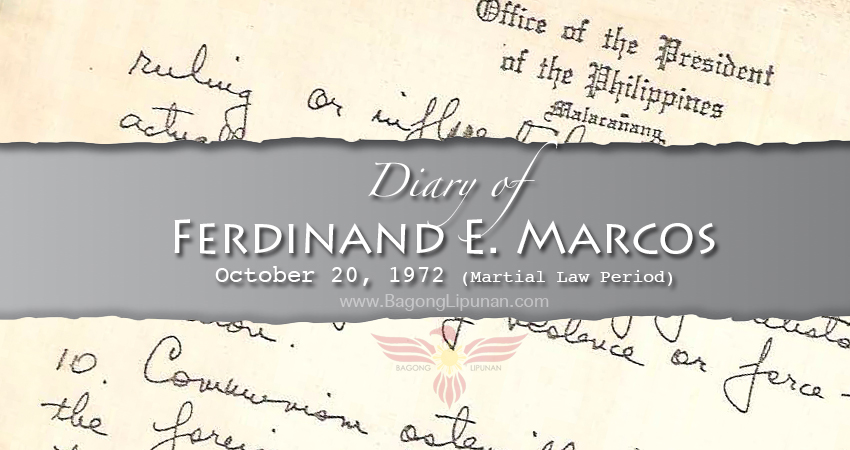 It would seem from the amount of applause he received and the raising of hands that followed, that the amendment was carried. Indeed, it was announced by Abe Sarmiento, who was then presiding, that the motion was carried.

But then Fidel Purisima demanded voting by tellers. This changed the situation. Many delegates would not express their true wishes because the walls of the session have many eyes: the dissenters would be watched by Big Brother!

In the voting by tellers, the result was 128 to 123 -or something like that- in favor of retaining the original draft provision which states that members of the 1971 Constitutional Convention who opt to serbe in the Interim Assembly by voting affirmatively would be the only ones who would be members of the National Assembly. This is clearly immoral, unfair and unjust -but the proponents have made up their minds

Yesterday, I casually told Ramon Encarnacion that perhaps the President would be a little more reasonable than his own lieutenants in the session hall. I overheard Bebet Duavit was willing to give 72 hours to those who were not present during the voting to signify their intention of voting affirmatively. I, therefore, went to Duavit in order to persuade him to lengthen this to, say, two weeks, to enable those who are abroad to come back and give their decision. But Duavit said this was impossible. As it was, he was only trying to get them to agree on this 72 hours’ grace, but not as an amendment to the provision. It is going to be some kind of suspension of rules before actual voting on the amendment.

Later, I rose, anyway, to introduce an amendment to extend the time for those who are absent to be able to vote. Before I could complete my first few sentences, however, the floor leader, Munding Cea, cut me off, and on the same theme, said it would be completely unfair and unjust to preclude our colleagues who are not present from voting…

To our great chagrin, Toto de la Cruz, chairman of the Committee on Rules, stood to oppose this.

How could anyone in conscience oppose something like this? Where is our sense of fairness? But then, a people secure in their numbers and certain of their purpose can too easily forget that democracy requires tolerance!

Arturo Pacificador would not brook any moderation. Evidently following a “script”, he announced that those absent would be given 72 hours, provided they personally cast their votes in an open session. When some amendments were proposed, such as to allow voting by cablegrams and tegerams or letters, Pacificador, his porcupine hair blasphemously pointing heavenwards, arrogantly gesticulated. “If this is under question, I better withdraw my motion,” he haughtily trumpeted…

The tension in the air was very heavy during the voting. The roll call took place. There were 14 “No” votes…

Afterwards, the dominant group made a motion to have our vote considered, for all purposes, as the same vote for the second and third readings.

It seems no quarter are to be given. Like a no-prisoners taken stance in war. In other words, the majority would take what it can -everything- now; why wait?

It was indecent, of course. But decency could not wait any longer. Immediate voting was done -and it passed almost unanimously.

In one stroke, so to speak, we actually voted on second and third readings on the provision in question -and that means then that the provision is finished -passed!

What is done is done. We have failed our people… We were elected to be members of the Convention, not to be assemblymen. The grant of extraordinary powers and the ratification of all actions of the President does not seem to bother the delegates too much. The fact that ours is now a rubber stamp Convention and that the Assembly would be a rubber stamp Assembly does not really matter. What is ultimately important to them, it would seem, is that we are going to be members of the Assembly -so the next area of concern is what salaries we are going to have.