The two Americans paid to assassinate me were supposed to do the job this morning but when they tried out the guns (even the .22 caliber) they were too loud.  This was explained by our penetration man, Talastas.

They have prepared a Comby wagon, put a hole in the back and have tried to park it between the press and the Maharlika or the boathouse and they can swipe at me at the Pangarap boat landing on the golf course. 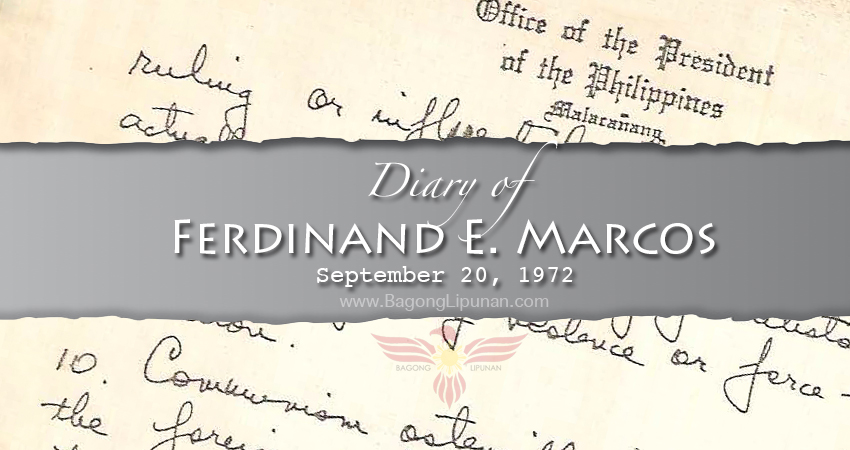 I declassified two documents which contain reports of Sen. Aquino to Sec. Ponce Enrile and Gen. Ramos July 27th and 29th, this year which show his propensity as a blubber mouth.

I attach copies of the documents in Envelope No. XXXV-A.  The original reports were in my diary.  Then I wrote Sen A. Roxas to inform him that what I wanted to do in the conference was 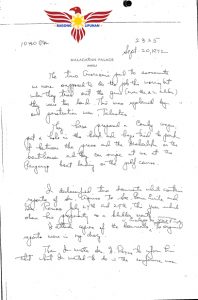 not to blame anyone but to break up a “link-up” of the Liberal Party to the Communist Party if any.  I attach this letter in XXXV-A.

I sent a  copy of the letter to all senators because of the expected privelege speech of Aquino copy of which I attach in XXXV-A.

Sen. Perez put my letter on the record.

Sec. Ponce Enrile dared Aquino who had denied his report, to a confrontation which the latter refused.

Sen. Maceda filed a motion to investigate Aquino but he withdrew it when Roxas objected.

I also sent copies of the affidavits of the other witnesses against Aquino to seven senators – Perez, Maceda, Almendras, Pelaez, Tevez, Tolentino, copy in XXXV-A.

This afternoon General Staff with the SND and the Chiefs of the major services came to see us to submit the Assessment of Public Order wherein they recommend the use of  “other forms of countering subversion/insurgency should be considered.” This means they recommend the use of Emergency Powers including Martial Law, formally.  Envelope No. XXXV-B.

Then we gave an interview where we kept silent on Emergency Powers but spoke of listing Arrival (?) syndicates in the Order of Battle of the communist armed elements, the Self-Reliant Defense Posture as it relates to internal threats, expenditures, additional armaments and personnel etc.

I was surprised to hear Sec. Melchor say he was now in favor of Martial Law although he was against it a year and a half ago.  And all Sec. Abad Santos said was, Let us not talk about it publicly.

I asked Sec. Melchor to submit a study and recommendation in writing and to prepare to use his American contacts to see the U.S. does not oppose us. 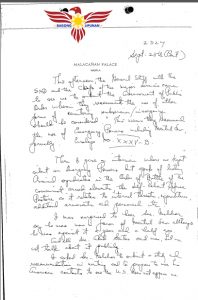 Johnny and I again reviewed the proclamation which we again amended.  He wrote out the orders on carrying firearms and on control of shipping.

While we were working on the list of target personalities, Amb. Byroade called to see me on the conversation I had with Robert Wales, President of the American community.  I see him at 11.00 AM.

I could not sign the proclamation and orders because they have to be re-typed.

Imelda is at the house of Imelda Cojuangco celebrating the latter’s birthday. 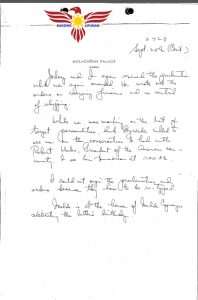