Things have moved according to plan although out of the total 200 target personalities in the plan only 52 have been arrested, including the three senators, Aquino, Diokno and Mitra and Chino Roces and Teddy Locsin.

At 7:15 PM I finally appeared on a nationwide TV and Radio broadcast to announce the proclamation of martial law, the general orders and instructions.

I place them in Envelope XXXV-C

I was supposed to broadcast at 12:00AM but technical difficulties prevented it.  We had closed all TV stations.  We had to clear KBS which broadcast it live.  VOP and PBS broadcast it by radio nationwide.

The broadcast turned out rather well and Mons. Gaviola as well as the [illegible] friends liked it.  But my most exacting critic, Imelda, found it impressing.  I watched the replay at 9:00 PM. 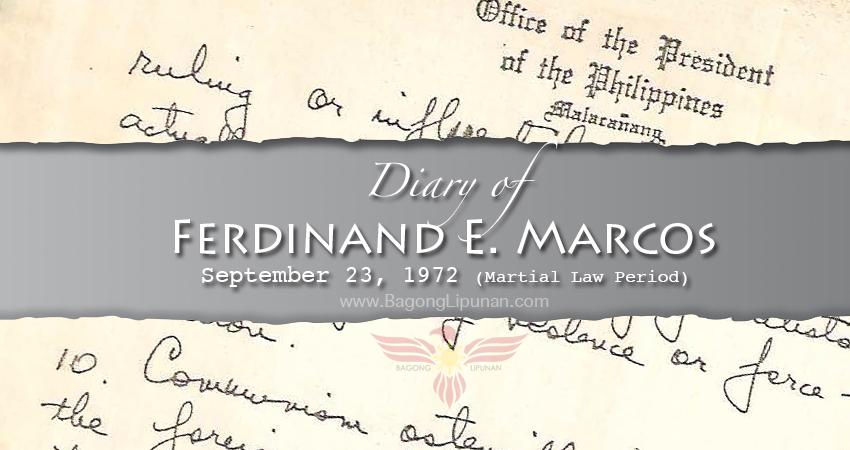 Arms bearing outside residence without permit punishable by death.

Kits Tatad read the proclamation, the orders and the instructions after my talk.

Have started checking on Zone Commanders.  Gen. Encarnacion of the IV does not seem to have been systematic.  He still talks of some people like Mayor Cabili criticizing the proclamation of martial law as premature although grudgingly extending cooperation under Gen. Order No. 3 for all offices to continue functioning.

Talk to Imee and Bongbong.  London newspaper had it I arrested the opposition, no mention of communists.

And called up Sec. Romulo and Amb. Romualdez before them.  New York Times at least was sure handed and spoke of martial law after the attempt of assassination of my Secretary of National Defense.

Ordered all wire services and embassies to be furnished the speech, proclamation, orders and instructions.