Gen. Ver’s men have apprehended Lehman the American triggerman and Manny Crisoligo the explosives and electronics man. But they have not caught Eddie Figueras, Tony Arevalo, Osmeña, Larry Truckman and others involved.

The duo have involved the other men and apparently there was an agreement that the Vice President would have to take over if I were assassinated so as to prevent anarchy.

But we have to check the involvement of the CIA or the U.S. Embassy, Vice Pres. Lopez and other important personalities.

Apparently they have been trying to assassinate me since Baguio (in Camp John Hay) in December 1971, the Rural Bankers Convention in the Pines Hotel, the SSS Convention of Labor in May 1st. 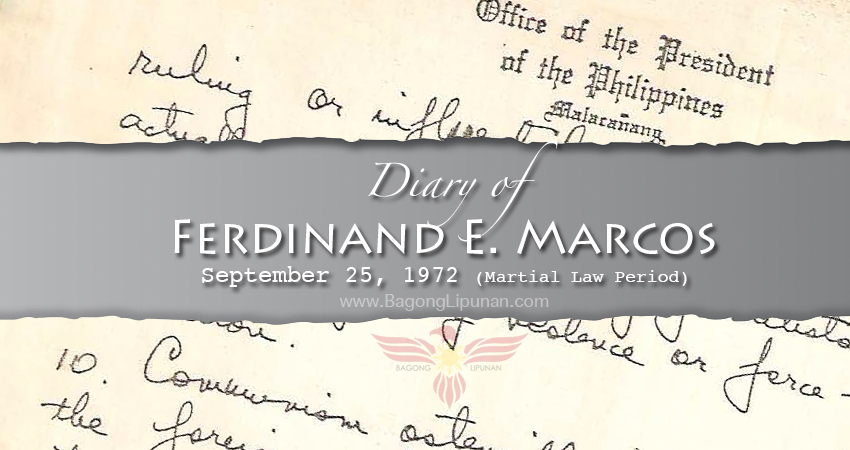 The Comby car that was prepared for the plot is indeed alarming.

I have dismissed some judges and punished some fiscals.

Met all the generals this morning to command them and issue instructions on:

1. The clean-up in Isabela, the Cagayan Valley and Mt. Province.

2. The policy in Mindanao and Sulu -we delay action there until we can concentrate our troops.

3. The Magantoc, Tarlac concentration of NPA’s

4. To prepare for the regrouping of the armed gangs, criminal or not, and the Communists.

4. Employment of the ROTC in civic actions

6. Reward for the Armed Forces.

I told them frankly that I needed their help and counsel because we must keep all the actuations within constitutional limits.

Justice Castro asked permission to ask a blunt question, “Is this a coup d’etat?” and I told him that it is not but it is the exercise of an extraordinary power by the president for a situation anticipated by the constitution.

Justice Esguerra said immediately that he feels that it is a legitimate exercise of martial law.

And apparently reading my mind, he said, in the Merriman case, Justice Tannay had issued a writ of habeas corpus for a man who was detained on orders of President Lincoln. And President Lincoln just disregarded the judicial order. And Justice Tanney said, “what can we do, we are confronted by a superior authority?

I then concluded that there must be no conflict between the two separate departments of Justice and Executive for it would be embarrassing to both.

I believe that they are both of this persuasion.

The public reaction throughout the Philippines is a welcome to martial law because of the smooth, peaceful reestablishment of peace and order and the hope of a reformed society. In fact most everyone now says, this should have been done earlier.

I attach the report of Boni Isip about the same result of a survey conducted by Liberal Party Leader Gerry Roxas.

It is indeed gratifying that everyone now finds or discovers I am some kind of a hero!