Met the Bishops Councils Executive Committee of Mons. Gavola, Alberto, Mon Diu and Fr. . They promised to help in the reform program and wanted to publish a resolution.

They confidently gave me information on a Carlos Selles who is supposedly being paid to assassinate me. He is supposed to be a Panamanian like a Negro and has suddenly become affluent as he is opening deposit accounts in different banks.

Gen. Ver has traced his residence in Pasay and we will apprehend him for questioning.

Sec. Abad Santos has prepared a plan to ask the judges to voluntarily resign.

And we will do the same in the Bureau of Customs and the BIR, LTC, CIR and other offices.

I was interviewed by John Nance and Gil Santos of AP. 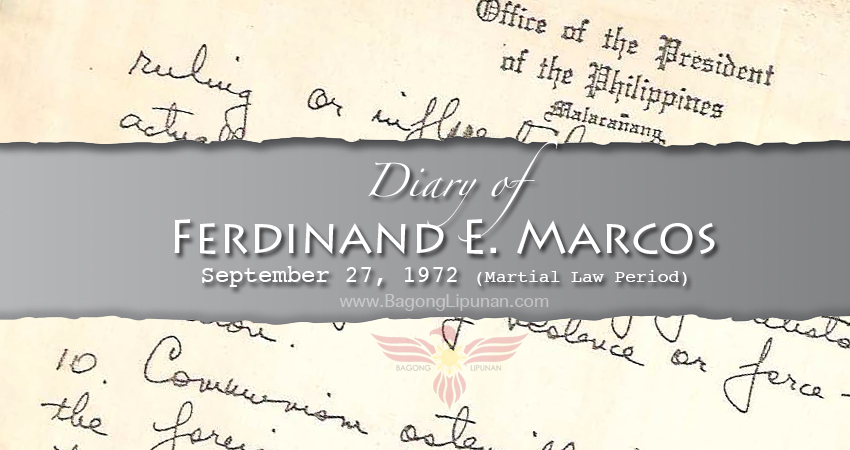 Traced the study of martial law to the writing of the book “Today’s Revolution -Democracy” and my revolution from the top or the center.

How the present peaceful revolution is a legal exercise of force to attain revolutionary objectives.

The setting and justification of a proclamation of martial law -the awakening to the threat in the Dagojo, Palawan landings, the rise in uncontrolled criminality both petty and syndicated, the paralyzation of government and business in the wake of the bombings, ambushes and the kidnappings -then the review of the captured documents and their reassessment showing that all that was happening had been planned a long time ago although the criminals were taking advantage of the confusion.

And the fundamental requisite of peace and order and reform for a New Society to be created out of the chaos and helplessness that governed everyone.

Joe de Venecia suggests a meeting with Gerry Roxas so that the Liberals may cooperate on the reforms. He suggested I invite Gerry to a conference tomorrow. But this may involve a compromise of our strong no-exception stance.

So I have not accepted the suggestion.

Everybody is saying how swiftly the peaceful revolution was accomplished. John Nance told Imelda “You did not expect it to be so neatly done.”

Will it be said by history that the communist threat was just a legal justification for a legal use of force?

Then let it also be said that it was a constitutional revolution –And that it was necessary to reform society — to convert a “sick society” into the “New Society.”