The legitimate use of force on chosen targets is the incontestable secret of the reform movement.

Restrained force will bring about the New Society.

And the Reformation is coming about without any obstacle.

Gerry Roxas wanted to be invited to meet with me. But the Liberal leaders all want to join up now that martial law is a success.

For that matter, everyone now wants to be identified with the Reform Movement. 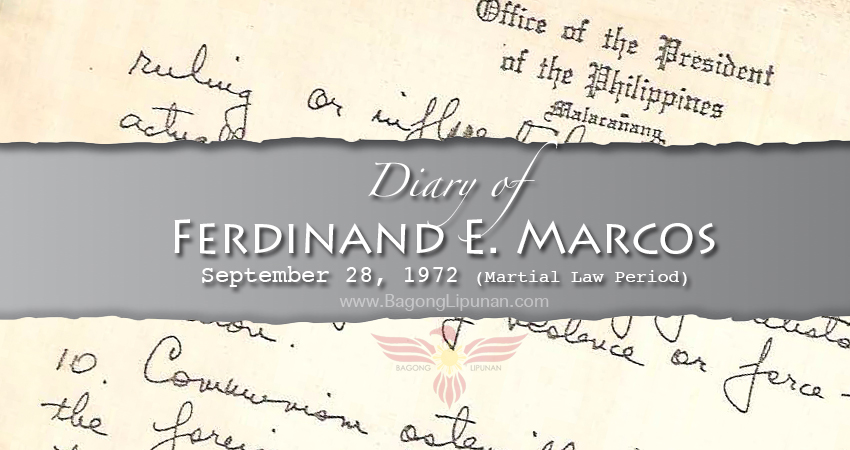 Freddie Elizalde who has been a critic has come (brought by Adrian Cristobal) to offer a plan of indoctrination of the masses.

But we already have such a plan. And this must be indoctrination by participation -inflexible justice and actual involvement.

The reasons for change can be articulated later.

I have asked Armand Fabella to organize a Think Tank.

Then I will organize a group of men to follow up projects.

We do not want another Vietnam nor another mainland China. If the Communists did not succeed in its plot to overthrow the Republic, the economy would have collapsed anyway because of the paralyzation of the government and business.

Received the lists of the Customs and BIR men to be dismissed tomorrow. Prepared the request for the judges to resign.

I am preparing the Educational Reform Act.

October will be the critical month. The Communists and criminals may be able to regroup.

We have to attend to criminality (keep it down) and food prices, repair the roads up to October.