“Wake up your minds to really make this country great again by having everybody get together and do things the right way.” 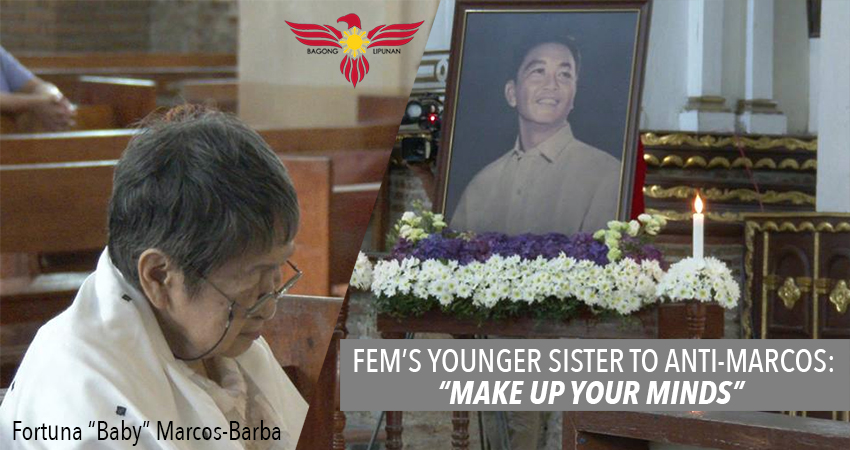 “The youngest sister of Former President Ferdinand E. Marcos (FEM), Fortuna “Baby” Marcos-Barba, shared her sentiments on the burial of her brother preceding the first of the nine-day novena being held in Ilocos Norte.

“Well of course, I’m happy about it. It’s about time they do something about it instead of just leaving it like that,” she said.

She expressed her hope that those opposing her brother’s burial can “make up your minds to really make this country great again by having everybody get together and do things the right way.“

Barba, at 85 years old, is the last surviving sibling among the four children of Don Mariano R. Marcos and Doña Josefa E. Marcos, who were both graduates of what is now the Philippine Normal University.

Between her and the former president were Dr. Pacifico E. Marcos and former Ilocos Norte Governor Elizabeth M. Keon.

‘Baby’ Fortuna was the only Marcos child not born in Ilocos Norte and has a 14-year age gap with FEM.

A barangay in the Ilocos town of Marcos is named after her to honor her efforts in flourishing the barangay after the town was separated from Dingras in 1963.

She fondly recalled from her childhood, “I was treated like a little girl and so I was kind of spoiled, I guess… in a way that, ‘Intindihin mo yung bata,’━they called me ‘bata,'” adding that her older brother always took care of her.

“After the war, [FEM] was the one who came to pick me up in Sarrat and brought me back to Manila,” where she was born. She had been evacuated to FEM’s birthplace town and stayed with their grandmother during the Second World War.

The novena, which began at the Immaculate Conception Church in Batac City this afternoon, will continue daily throughout Sarrat, Dingras, Vintar, Bacarra, Laoag City, Badoc, and Paoay, ending in Batac on November 24.”