GENERAL ORDER NO. 7-A

WHEREAS, Proclamation Ho, 1081. dated September 21, 1972, declaring a state of martial law throughout the land was issued for reasons therein mentioned;

WHEREAS, by virtue of the said Proclamation No. 1081 and in order to restore the tranquility and stability of the nation and secure the people from violence, injuries and loss of lives in the quickest possible manner and time, General Order No. 6, dated September 22, 1972, and General Order No. 79 dated September 23, 1972, were issued to prohibit the inhabitants of the country from keeping any fire arm without a license duly and legally issued for that purpose, and from the carrying of such firearm outside the residence of the duly licensed holder thereof;

WHEREAS, said General Order No. 6 and General Order No. 7 do not exempt certain officials of the Department of Justice who are charged with and/or involved in the enforcement of law and order and/or the administration of criminal justice throughout the land;

WHEREAS, in order that the said officials can perform effectively their functions and duties, it is necessary that they be allowed to carry firearms outside residence; 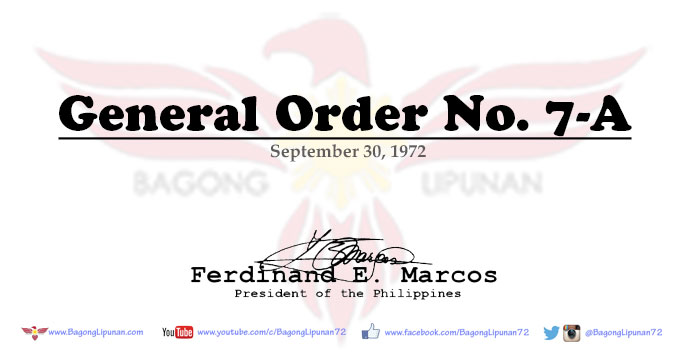 1. Agents of the National Bureau of Investigation shall be allowed to carry firearms outside residence while in the actual performance of official mission or duty;

2. Guards of the Bureau of Prisons and of provincial and city jails are authorized to carry their duly licensed firearms only within the premises of the prison or jail in which they are actually on guard duty, and/or while escorting prisoners therefrom to offices of provincial/city fiscals or to military tribunals or civil courts in compliance with subpoena issued for the purpose, and return.

3. The Chief of the Constabulary shall prescribe regulations as he may deem necessary for the effective implementation of this Order,

Done in the City of Manila, this 30th day of September, in the year of Our Lord, nineteen hundred and seventy-two.