WHEREAS, Proclamation No. 1081, dated September 21, 1972, declaring a state of martial law throughout the land was issued because of wanton destruction of lives and property, widespread lawlessness and anarchy, and chaos and disorder now prevailing throughout the country, which condition has been the intended consequences of the activities of groups of men now actively engaged in a criminal conspiracy to seize political and state power in the Philippines and to take over the Government by force and violence the extent of which has now assumed the proportion of an actual war against our people and their legitimate Government;

WHEREAS, terroristic activities, assassinations of innocent citizens and leaders of our society are going on unabated due to the mounting efforts of these radical and lawless elements who are now actively challenging and defying the Government through actual military confrontations; and

WHEREAS, in order to restore the tranquility and stability of the nation and secure the people from violence, injuries and loss of lives in the quickest possible manner and time, it is necessary to prohibit the inhabitants of the country from keeping any firearm without a license duly and legally issued for that purpose as well as to prohibit the carrying of such firearm outside the residence of the duly licensed holder thereof; 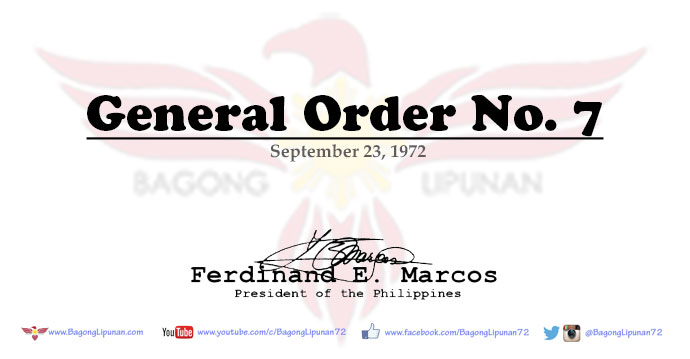 NOW, THEREFORE, I, FERDINAND E. MARCOS, Commander-in-Chief of all the Armed Forces of the Philippines, and pursuant to Proclamation No. 1081, dated September 21, 1972 and General Order No. 6, dated September 22, 1972, do hereby order that:

1. Only officers and men of the Armed Forces of the Philippines and police officers in the actual performance of official mission or duty shall be allowed to carry firearms outside residence;

2. Guards of private security agencies and public or private corporations or firms are authorized to carry their duly licensed firearms only from the premises or the offices of such agencies, corporations or firms to their place of work and return. Security guards should not carry firearms higher than 12 gauge shotguns, caliber .22 rifles or caliber .38 pistols or revolvers. In no case should these firearms be carried outside the aforementioned places. Security agencies shall establish a depository of firearms within their offices and in the premises of places of work of their guards. All high-powered long firearms of private security agencies and company guards must be deposited with the Firearms; and

3. Likewise, private corporations and individuals other than members of the Armed Forces of Philippines and of the city or municipal police forces who are in possession of high-powered long firearms, whether licensed or unlicensed, are required to deposit the same with the Firearms and Explosives Unit of the Philippine Constabulary or with the nearest Provincial Headquarters.

4. All firearms under the custody of the Bureau of Customs and/or Bureau of Posts as well as those under the custody of clerks of courts the criminal cases involving which are already terminated shall be turn u over to the Firearms and Explosives Unit of the Philippine Constabulary or to the nearest Provincial Headquarters.

5. The Chief of Constabulary shall prescribe regulations to implement this Order.

Done in the City of Manila, this 23rd day of September in the year of Our Lord, nineteen hundred and seventy-two.