Getting to know Imee Marcos

Then she was sent in London to continue her studies together with siblings, Irene and Bongbong.  In London, she attended the London Academy of Music and Dramatic Arts Acting and Playwriting. She also took up Acting at the Royal Academy of Music and Dramatic Arts in London, UK . Then, she went to the Convent of the Holy Child Jesus, Mayfield, Sussex,England British Kingdom and completed her secondary education at Santa Catalina School in Monterey, California where she graduated VALEDICTORIAN of her class.  She took up her B.A. in Religion and Politics and graduated from Princeton University in New Jersey, USA.

Back in Manila, Madam Imee earned her Bachelor of Laws from the University of the Philippines College of Law in Diliman, Quezon City. Then, she earned her M.A. in Management and Business Administration from the Asian Institute of Management in Makati City. She did graduate studies in anthropology, sociology, literature, arts, history and theater at Princeton University in New Jersey and the University of the Philippines in Diliman. She also studied French and Dialectical Arabic at the Royal University of Rabat in Morocco and Writing: screenplay; children’s literature; painting and art; and interior design at the National University of Singapore College of Extramural Studies.

Hon. Imee Marcos was counsel at the Center for Legal Aid at the U.P. College of Law. She was also a consultant for corporate taxation of the Independent Realty Corp., Anchor Corp., Prime Holdings, MidPasig Realty Corp. She was columnist of the The Manila Bulletin in Manila, publisher of the Filipino Film Review, publisher and editor of the Kabataang Barangay Foundation, Makati, Metro Manila, and special consultant to the chairman of the board of ABS-CBN, RPN 9 and IBC 13. From 1979-1986, she was consultant to the minister of the National Media Production Center in Quezon City. Then, from 1981 to 1986, she was director general of the Experimental Cinema of the Philippines.

Prior to politics, Imee was producer for eleven years (1975-1986) of two famous Filipino children shows namely: “Kulit Bulilit” and “Kaluskos Musmos”- where today’s Batibot originated. For five years (1981-1986), Imee was director-general of experimental cinema of the Philippines and produced: Oro, Plata, Mata; Himala; Misteryo sa Tuwa and Soltero. She co-produced with Marilou Diaz-Abaya the movie Brutal; with Peque Gallaga, Scorpio Nights; and with Tikoy Aguiluz, “The Boatman.”

Her Political career start as:

1. Cabinet Representative of Kabataang Barangay
Madam Imee Marcos’ first stint in politics was as Cabinet representative of the youth sector from 1979 to 1986, being the national chairman of the Kabataang Barangay or youth organization.
2. Assemblywoman
Then, she became assemblywoman, being member of the Batasang Pambansa or National Assembly from 1984 to 1986.
3. Congresswoman (1998-2007)
She was first elected to Congress as representative of the 2nd District of Ilocos Norte in 1998, and was re-elected in both the 2001 and 2004 national elections.
Marcos, describing herself as a reluctant candidate for congress in 1998, now describes herself as a reluctant politician. But strongly feels duty-bound to do something for her father’s bailiwick in Ilocos Norte.
4. Governor
She has been Governor of Ilocos Norte since 2010 up to present 2017.
In the 2010 elections, she ran as Governor of Ilocos Norte against her cousin, Michael Marcos Keon, who was the governor during that time. She defeated her cousin by a landslide victory. Madam Imee had 196,160 votes while her cousin, Gov. Michael had only 86,005 votes. She assumed office on June 30, 2010. She was re-elected as Governor in the 2013 polls, unopposed. On October 16, 2015, she filed as a candidate for her third and final term. 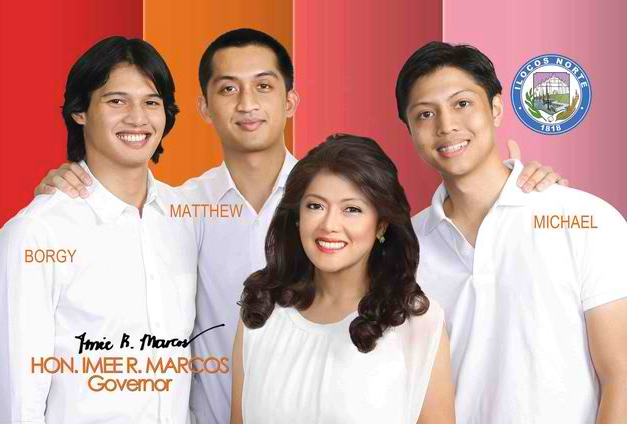 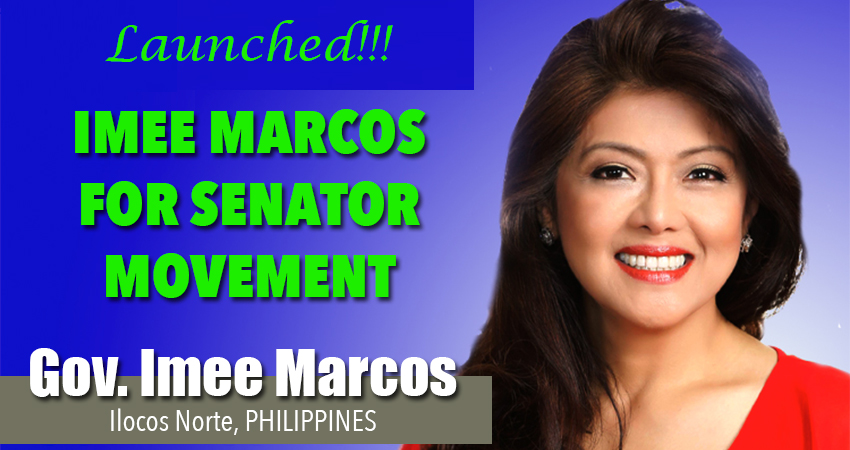