INAUGURAL ADDRESS OF HIS EXCELLENCY FERDINAND E. MARCOS
Delivered at the Quirino Grandstand, Manila on December 30, 1965 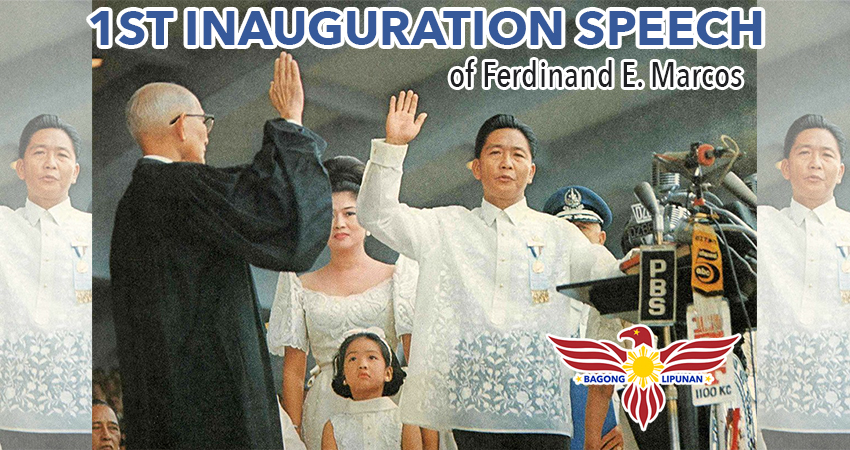 By your mandate, through the grace of the Almighty, I stand here today in the traditional ritual of the assumption of the Presidency.

By your mandate, once again you have demonstrated the vitality of our democracy by the peaceful transference of governmental authority.

It is but fitting and proper that this traditional ritual be undertaken on this sacred ground. For sixty‑nine year ago today, a young patriot and prophet of our race fell upon this beloved soil. He fell from a tyrant’s bullet and out of the martyr’s blood that flowed copiously there sprung a new nation.

That nation became the first modern republic in Asia and Africa. It is our nation. We are proud to point to our country as one stable in an area of instability; where ballots, not bullets, decide the fate of leaders and parties.

Thus Kawit and Malolos are celebrated in our history as acts of national greatness. Why national greatness? Because, armed with nothing but raw courage and passionate intelligence and patriotism, our predecessors built the noble edifice of the first Asian Republic.

With the same reverence do we consider Bataan, Corregidor and the Philippine resistance movement.

Today the challenge is less dramatic but no less urgent. We must repeat the feat of our forebears in a more commonplace sphere, away from the bloody turmoil of heroic adventure – by hastening our social and economic transformation. For today, the Filipino, it seems, has lost his soul, his dignity and his courage.

We have come upon a phase of our history when ideas are only a veneer for greed and power in public and private affairs, when devotion to duty and dedication to a public trust are to be weighed at all times against private advantages and personal gain, and when loyalties can be traded in the open market.

We have ceased to value order as a social virtue. Law, we have learned successfully to flaunt. We have become past masters at devising slogans for the sake of recorders of his history but not for those who would live by them in terms of honor and dignity.

Peace in our time, we declare. But we can not guarantee life and limb in our growing cities. Prosperity for all, we promise. But only a privileged few achieve it, and, to make the pain obvious, parade their comforts and advantages before the eyes of an impoverished many. Justice and security are as myths rendered into elaborate fictions to dramatize our so‑called well‑being and our happy march to progress.

For indeed we must rise from the depths of ignominy and failure. Our government is gripped in the iron hand of venality, its treasury is barren, its resources are wasted, its civil service is slothful and indifferent, its armed forces demoralized and its councils sterile.

But we shall draw from our rich resources of spiritual strength that flow from this place of martyrdom.

We are in crisis. You know that the government treasury is empty. Only by severed self‑denial will there be hope for recovery within the next year.

Our government in the past few months has exhausted all available domestic and foreign sources of borrowing. Our public financial institutions have been burdened to the last loanable peso. The lending capacity of the Central Bank has been utilized to the full. Our national government is indebted to our local governments. There are no funds available for public works and little of the appropriations for our national government for the present fiscal year. Industry is at a standstill. Many corporations have declared bankruptcy. Local manufacturing firms have been compelled to close or reduce their capacity.

Unemployment has increased. Prices of essential commodities and services remain unstable. The availability of rice remains uncertain. Very recently the transportation companies with the sanction of the Public Service Commission hiked their fares on the plea of survival.

I, therefore, first call upon the public servants for self-sacrifice. Long have we depended upon the people. In every crisis, we call upon our citizens to bear the burden of sacrifice. Now, let the people depend upon us. The economic viability of the government and of the nation requires immediate retrenchment. Accordingly, we must install without any delay a policy of rigorous fiscal restraint.

Every form of waste – or of conspicuous consumption and extravagance, shall be condemned as inimical to public welfare.

Frugality with government funds and resources must be developed into a habit at every level of the government. High public officials must themselves set the example.

One of the most galling of our inherited problems is that of lawlessness. Syndicated crime has been spawned by smuggling. The democratic rule of law has lost all meaning and majesty, since all men know that public officials combine with unscrupulous businessmen to defraud government and the public – with absolute impunity. The sovereignty of the republic has never before been derided and mocked as when the lawless elements, smuggling syndicates and their protectors, disavow the power of laws and of our government over them. This is the climate for criminality. Popular faith in the government deteriorates.

We must, therefore, aim quickly at the establishment of a genuine rule of law. We shall use the fullest powers of the Presidency to stop smuggling and lawlessness.

I, therefore, call upon all to join hands with me in maintaining the supremacy of the law. To those flaunt the law, I say: this is my constitutional duty and I am resolved to perform it. But it is not mine alone but yours. For whether Filipino or alien you survive under the mantle of protection granted by our laws. I am pledged to execute the law and preserve the constitution of our republic. This I shall do. And if need be I shall direct the forcible if legal elimination of all lawless elements.

Our social policy will seek to broaden the base of our democracy. Our forefathers built a democratic republic on an extremely narrow social and economic base. The task of our generation is to broaden this base continuously. We must spread opportunities for higher incomes for all. But we shall encourage investment to insure progressive production – the true answer to our economic ills.

Our people sought a new administration in the expectation of a meaningful change – certainly a bolder, more courageous approachto our problems.

They must have believed that we can provide this new outlook, and perhaps the passion for excellence – the motive force for greatness.

We shall provide this approach, the necessary change of pace, the new outlook that places large demands and large challenges before the nation. The human person is unique in creation. Of all organisms, it is he that develops in proportion to the demands made upon his abilities. That is true of individuals and I hold it to be true of nations.

Recently, we have come to realize that economic planning is as essential for freedom as political planning.

Before today we had squandered the energies and resourcefulness of our people. In the government we saw a crippling hesitancy and timidity to face the facts of our times and to boldly provide the initiative.

We cannot afford to rest on the shock of our perceptions, nor on the outrage even of our painful admission of the facts. We shall have to restore into our life the vitality which had been corroded by our complacency.

In international affairs, we shall be guided by the national interests and by the conscience of our society in response to the dilemma of man in the 20th century.

The Filipino today lives is a world that is increasingly Asian as well as African. Asia claims one‑half of all humanity, and this half lives on a little over one‑sixth of the earth’s habitable surface. Africa’s millions are also now coming to their own. Recent events have shown the willingness of our Asian friends to build a bridge to us. We can do less than to build strong foundations at our end.

Today, as never before, we need a new orientation toward Asian; we must intensify the cultural identity with ancient kin, and make common cause with them in our drive toward prosperity and peace. For this we shall require the understanding of ourselves and of Asia that exceeds acquaintance; we require the kind of knowledge that can only be gained through unabating scholarship on our  histories, cultures, social forces and aspirations, and through more active interaction with our friends and neighbors.

What threatens humanity in another area threatens our society as well. We cannot, therefore, merely contemplate the risks of our century without coming into any on our own. Wherever there is a fight for freedom we cannot remain aloof from it. But whatever decision shall have to make shall be determined by our own interests tempered by the reasonability of that patriotic position in relation to the international cause.

This nation can be great again. This I have said over and over. It is my article of faith, and Divine Providence has willed that you and I can now translate this faith into deeds.

I have repeatedly told you: each generation writes its own history. Our forbears have written theirs. With fortitude and excellence we must write ours.

We must renew the vision of greatness for our country.

This is a vision of our people rising above the routine to face formidable challenges and overcome them. It means the rigorous pursuit of excellence.

It is a government that acts as the guardian of the law’s majesty, the source of justice to the weak and solace to the underprivileged, a ready friend and protector of the common man and a sensitive instrument of his advancement and not captivity.

This vision rejects and discards the inertia of centuries.

It is a vision of the jungles opening up to the farmers’ tractor and plow, and the wilderness claimed for agriculture and the support of human life; the mountains yielding their boundless treasure, rows of factories turning the harvests of our fields into a thousand products.

It is the transformation of the Philippines into a hub of progress – of trade and commerce in Southeast Asia.

It is our people bravely determining our own future. For to make the future is the supreme act of freedom.

This is a vision that all of you share for our country’s future. It is a vision which can, and should, engage the energies of the nation. This vision must touch the deeper layers of national vitality and energy.

We must awake the hero inherent in every man.

We must harness the wills and the hearts of all our people. We must find the secret chords which turn ordinary men into heroes, mediocre fighters into champions.

Not one hero alone do I ask from you – but many; nay all, I ask all of you to be the heroes of our nation.

Offering all our efforts to our Creator, we must drive ourselves to be great again.

This is your dream and mine. By your choice you have committed yourselves to it. Come then, let us march together towards the dream of greatness. 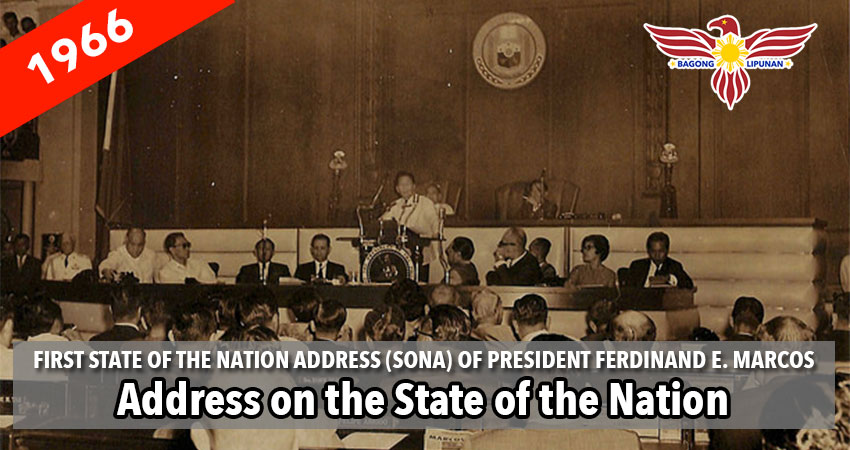