The idea of putting up a modern Planetarium in Manila was conceived in 1970’s by the former National Museum Director Godofredo Alcasid Sr. with the assistance of Mr. Maximo P. Sacro, Jr. of the Philippine Weather bureau (now PAGASA) and one of the founders of the Philippine Astronomical Society (PAS). The Planetarium is located between the Japanese Garden and the Chinese Garden at the Luneta Park.

The project was presented to the former First Lady Mrs. Imelda R. Marcos, then the Chairman of the National Parks and Development Committee (NPDC). As one of her priority projects, Mrs. Marcos requested the Department of Public Works and Highways to prepare the Planetarium in one month’s time and allocate the funds for the construction. Construction of the building began in 1974 and took nine months to complete. It was formally inaugurated on October 8, 1975. The Presidential Decree No. 804-A, issued on September 30, 1975, affirmed the Planetarium’s status. Its primary function is to disseminate astronomical information through planetarium shows, lectures, demonstrations, exhibits and actual celestial observations.

The unique feature of the Planetarium is the true-to-life projection of astronomical bodies that captures the interest and tickles the imagination of viewers.The National Planetarium is 16-meters (52 ft) high and has a seating capacity of 310.  The GM-15 Goto Planetarium Projector was acquired through the Japanese Reparation Program in the Philippines.  It features four daily regular shows and a permanent exhibit in the main building featuring paintings of Philippine astronomical myths and beliefs and diorama representations of the Solar System, major constellations and astronomists.

In 2012, the National Planetarium had more than 40,000 visitors, mostly students from Metro Manila and nearby provinces. Its exhibition drew over 2,000 visitors.  Efforts to continually develop its facilities are ongoing and the public could expect improvements in 2013. 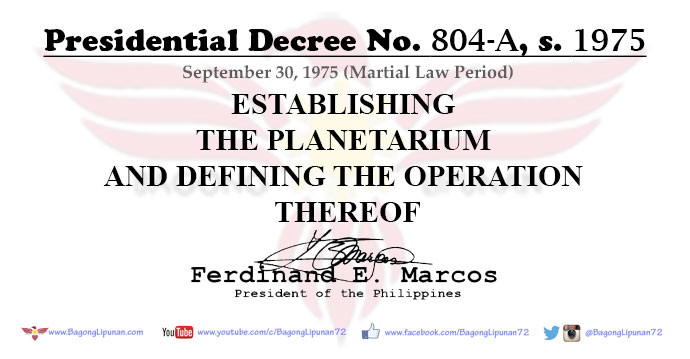