STATING THE QUESTIONS TO BE SUBMITTED TO THE PEOPLE IN THE REFERENDUM-PLEBISCITE ON OCTOBER 16, 1976.

WHEREAS, when the people expressed their continued opposition to the convening of the interim National Assembly, their opposition was based on the general inacceptability of said interim body as constituted under Section 2 of Article XVII of the new Constitution, thus showing the people’s desire to have such body abolished and replaced by amending the Constitution;

WHEREAS, the incumbent President in his desire to consult the people as to how the corresponding amendment is to be made, issued P.D. No. 991 calling for a national referendum on October 16, 1976 to decide, among others, this particular issue of the existence of the interim assembly, its replacement and the powers and functions of the body which is to replace it;

WHEREAS, the people through the barangays and sanggunians have likewise manifested their wish that the constitutional amendment providing for the new interim legislative body be submitted to the people directly in the October 16, 1976 referendum-plebiscite. 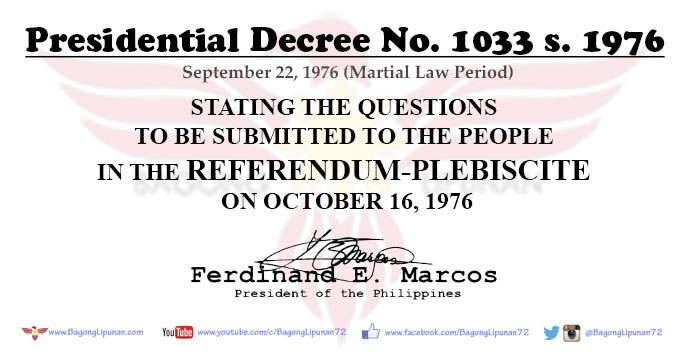 NOW, THEREFORE, I, FERDINAND E. MARCOS, President of the Philippines, by virtue of the powers vested in me by the Constitution, do hereby decree:

Section 1. The questions to be submitted to the people in the referendum-plebiscite to be held on October 16, 1976 shall be as follows:

1. Do you want martial law to be continued?

2. Whether or not you want martial law to be continued, do you approve the following amendments to the Constitution? For the purpose of the second question, the referendum shall have the effect of a plebiscite within the contemplation of Section 2 of Article XVI of the Constitution.

1. There shall be, in lieu of the Interim National Assembly, an interim Batasang Pambansa, Members of the interim Batasang Pambansa which shall not be more than 120, unless otherwise provided by law, shall include the incumbent President of the Philippines, representatives elected from the different regions of the nation, those who shall not be less than eighteen years of age elected by their respective sectors, and those chosen by the incumbent President from the members of the Cabinet. Regional representatives shall be apportioned among the regions in accordance with the number of their respective inhabitants and on the basis of a uniform and progressive ratio while the sectors shall be determined by law. The number of representatives from each region or sector and the manner of their election shall be prescribed and regulated by law.

2. The interim Batasang Pambansa shall have the same powers and its members shall have the same functions, responsibilities, rights, privileges, and disqualifications as the interim National Assembly and the regular National Assembly and the members thereof. However, it shall not exercise the power provided in Article VIII, Section 14(1) of the Constitution.

3. The incumbent President of the Philippines shall, within 30 days from the election and selection of the members, convene the interim Batasang Pambansa and preside over its sessions until the Speaker shall have been elected. The incumbent President of the Philippines shall be the Prime Minister and he shall continue to exercise all his powers even after the interim Batasang Pambansa is organized and ready to discharge its functions, and likewise he shall continue to exercise his powers and prerogatives under the nineteen hundred and thirty five Constitution and the powers vested in the President and the Prime Minister under this Constitution.

5. The incumbent President shall continue to exercise legislative powers until martial law shall have been lifted.

6. Whenever in the judgment of the President (Prime Minister), there exists a grave emergency or a threat or imminence thereof, or whenever the interim Batasang Pambansa of the regular National Assembly fails or is unable to act adequately on any matter for any reason that in his judgment requires immediate action, he may, in order to meet the exigency, issue the necessary decrees, orders or letters of instructions, which shall form part of the law of the land.

7. The barangays and sanggunians shall continue as presently constituted but their functions, powers, and composition may be altered by law.

Referenda conducted thru the barangays and under the supervision of the Commission on Elections may be called at any time the government deems it necessary to ascertain the will of the people regarding any important matter whether of national or local interest.

8. All provisions of this Constitution not inconsistent with any of these amendments shall continue in full force and effect.

9. These amendments shall take effect after the incumbent President shall have proclaimed that they have been ratified by a majority of the votes cast in the referendum-Plebiscite.

Done in the City of Manila, this 22nd day of September, in the year of Our Lord, nineteen hundred and seventy-six.