WHEREAS, the New Constitution declares that a public office is a public trust and ordains that public officers and employees shall serve with the highest degree of responsibility, integrity, loyalty and efficiency and shall remain at all times accountable to the people;

WHEREAS, to attain the highest norms of official conduct required of public officers and employees, Section 5, Article XIII of the New Constitution provides for the creation of a special court to be known as Sandiganbayan; 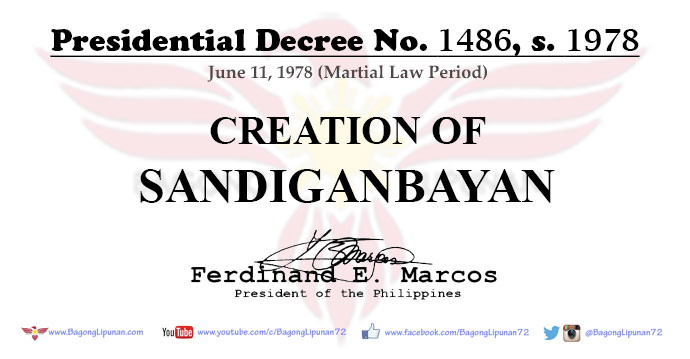 NOW, THEREFORE, I, FERDINAND E. MARCOS, President of the Philippines, by virtue of the powers in me vested by the Constitution and pursuant to Proclamation No. 1081, dated September 21, 1972, do hereby order and decree as follows:

Section 1. Sandiganbayan; Composition; Qualifications; tenure; removal and compensation. A special court, possessing all the inherent powers of a court of justice, to be known as the Sandiganbayan is hereby created composed of a Presiding Judge and eight (8) Associate Judges who shall be appointed by the President and shall be subject to the same inhibitions and/or disqualifications as judges of courts of first instance.

No person shall be appointed Presiding Judge or Associate Judge of the Sandiganbayan, unless he is a natural-born citizen of the Philippines, at least 40 years of age and for at least ten (10) years or more had been a judge of a court of record or been engaged in the practice of law in the Philippines or has held office requiring admission to the bar as a prerequisite for a like period.

The Presiding Judge and the Associate Judges shall not be removed from office except on impeachment upon the grounds and in the manner provided for in Sections 2 and 3 of Article III of the 1973 Constitution.

The Presiding Judge shall receive an annual compensation of P60,000.00 and each Associate Judge P50,000.00 which shall not be diminished during their continuance in office.

They shall hold office until they reach the age of 65 years or become incapacitated to discharge the duties of their office.

Section 2. Official Station; Place of Holding Sessions. The Sandiganbayan shall have its principal office in the Metro Manila Area; Provided, however, that the Presiding Judge may authorize any division or divisions of the court to hold sessions at any time and place outside Metro Manila to hear and decide cases emanating from any of the existing judicial districts.

Whenever necessary, the Sandiganbayan may require the services of the personnel and the use of the facilities of any agency of the Government, national or local, including the courts of first instance of the province where any of the divisions is holding session and those personnel of such agencies or courts shall be subject to the order of the Sandiganbayan.

Section 3. Quorum. Five judges shall constitute a quorum for sessions en banc, and two judges for sessions in division; Provided, that when a quorum and/or the majority required for a decision of the Sandiganbayan either en banc or in division, or the trial or hearing of cases cannot be had due to the legal disqualification or temporary disability of a judge or of a vacancy occurring therein, the President shall, upon recommendation of the Presiding Judge, designate any judge of the court of first instance or of the circuit criminal court of the judicial district concerned to sit temporarily therein.

If the Presiding Judge is present in any session of the court, whether en banc or in division, he shall preside. In his absence the Associate Judge attending who is first in precedence shall preside.

Section 4. Jurisdiction. Except as herein provided, the Sandiganbayan shall have original and exclusive jurisdiction to try and decide:

(b) Crimes committed by public officers or employees, including those employed in government-owned or controlled corporations, embraced in Title VII of the Revised Penal Code;

(c) Other crimes or offenses committed by public officers or employees including those employed in government-owned or controlled corporations in relation to their office; Provided, that, in case private individuals are accused as principals, accomplices or accessories in the commission of the crimes hereinabove mentioned, they shall be tried jointly with the public officers or employees concerned.

Where the accused is charged of an offense in relation to his office and the evidence is insufficient to establish the offense so charged, he may nevertheless be convicted and sentenced for the offense included in that which is charged.

(d) Civil suits brought in connection with the aforementioned crimes for restitution or reparation of damages, recovery of the instruments and effects of the crimes, or forfeiture proceedings provided for under Republic Act No. 1379;

(e) Civil actions brought under Articles 32 and 34 of the Civil Code.

Exception from the foregoing provisions during the period of material law are criminal cases against officers and members of the Armed Forces of the Philippines, and all others who fall under the exclusive jurisdiction of the military tribunals.

Section 7. Form, finality and enforcement of decisions; petitions for reconsideration. Decisions and final orders of the Sandiganbayan shall contain complete findings of fact on all issues properly raised before it. Decisions and final orders en banc shall be subject to review by the Supreme Court in accordance with Rule 45 of the Rules of Court; and those of a division shall be appealable under Rule 42 thereof. The Supreme Court shall hear and decide any case on appeal promptly and without the necessity of placing it upon the regular calendar. Whenever, in any case decided by the Sandiganbayan en banc or by a division thereof, the death penalty of life imprisonment shall have been imposed, the records shall be forwarded to the Supreme Court whether the accused shall have appealed or not, for review and judgment, as law and justice shall dictate.

Final judgments and orders of the Sandiganbayan en banc or in division shall be executed and enforced in the manner provided for in the Rules of Court.

Section 9. Authority over internal affairs. The Sandiganbayan shall administer its own internal affairs and may adopt such rules governing the constitution of its divisions, the allocation of cases among them, the rotation of judges and other matters relating to its business.

Section 10. Proceedings free of charge; premature publicity prohibited. All proceedings in the Sandiganbayan en banc or in division shall be conducted at no cost to the complainant and/or his witnesses.

No criminal complaint shall be given due course by the Sandiganbayan except upon a certification by the Chief Special Prosecutor of the existence of probable cause to be determined after a preliminary investigation conducted in accordance with existing laws. No publicity shall be allowed during the pendency of such preliminary investigation and the name of the complainant and the accused shall not be made public until after an information is field with the Sandiganbayan.

Section 11. Administrative Personnel. Upon recommendation of the Sandiganbayan, the Supreme Court may designate, from among the officers and employees under it, or appoint the personnel necessary for the Sandiganbayan, including a Clerk of Court and three (3) Deputy Clerks of Court; Provided, however, that those designated shall not receive additional compensation, except per diems, traveling and necessary expenses in accordance with existing laws and rules.

The Chief Special Prosecutor, Assistant Chief Special Prosecutor and Special Prosecutors mentioned in the preceding paragraph shall have the authority to administer oaths, to issue subpoena and subpoena duces tecum, summon and compel witnesses to appear and testify under oath before them and to bring books, documents or other things under their control and to secure the attendance or presence of any absent or recalcitrant witness through application before the Sandiganbayan en banc or in division or before any inferior or superior court having jurisdiction of the place where the witness or evidence may be found.

The Chief Special Prosecutor and his assistants shall be under the control of the Secretary of Justice.

“The Sandiganbayan may, upon proper, request of the Chief Special Prosecutor, require the assistance and services of any Department, Agency, or Bureau of the government.

Section 15. Funding. There is hereby immediately appropriated out of any funds in the National Treasury not otherwise appropriated, such sums as may be necessary to carry out the provisions of this Decree and thereafter to be included in the general appropriation act. The appropriations for the Sandiganbayan shall be automatically released in accordance with a schedule submitted by the Sandiganbayan.

Section 16. Repealing Clause. Any provision of law, order, rule or regulation inconsistent with the provisions of this Decree is hereby repealed or modified accordingly.

Section 17. Effectivity. This Decree shall be part of the laws of the land and shall take effect immediately.

Done in the City of Manila, this 11th day of June, in the year of Our Lord, nineteen hundred and seventy-eight.