CREATING THE OFFICE OF THE OMBUDSMAN, TO BE KNOWN AS TANODBAYAN

To give effect to the constitutional right of the people to petition the government for redress of grievances and to promote higher standards of integrity and efficiency in the government service, I, FERDINAND E. MARCOS, President of the Philippines, by virtue of the powers vested in me under the Constitution and pursuant to Proclamation No. 1081, dated 21 September 1972, hereby order and decree as part of the law of the land: 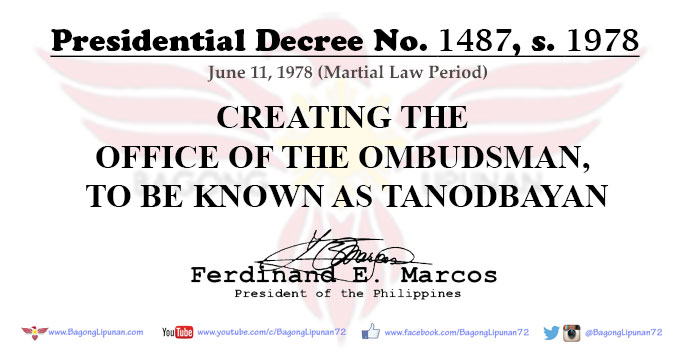 SECTION 1. Short title. — This Decree may be cited as the Tanodbayan Decree of 1977.

SECTION 2. Establishment of office. — An independent Office of the ombudsman, to be called the Tanodbayan, is hereby established. The Tanodbayan shall have two Deputies for Luzon, one for the Visayas and one for Mindanao.

SECTION 3. Appointment. — The President shall appoint the Tanodbayan and his Deputies.

SECTION 4. Qualifications. — The Tanodbayan and his Deputies shall be members of the bar, well equipped to analyze problems of law, administration, and public policy, and shall not have been actively involved in partisan affairs.

SECTION 5. Disqualifications. — The Tanodbayan and his Deputies shall not, during their tenure in office, engage in the practice of any profession or in the management of any business, or be financially interested directly or indirectly in any contract with, or in any franchise or privilege granted by, the Government, or any subdivision, agency, or instrumentality thereof including government-owned or controlled corporations.

SECTION 6. Term of Office. — (a) To Tanodbayan and his Deputies shall serve for a term of seven years without reappointment unless removed by the President upon his determination that the Tanodbayan or any of his Deputies has become incapacitated or has been guilty of neglect of duty, or misconduct.

SECTION 7. Salary. — Unless otherwise provided by law, the Tanodbayan and each Deputy Tanodbayan shall receive an annual salary of sixty thousand pesos and fifty thousand pesos, respectively, which shall not be decreased during their continuance in office.

SECTION 8. Organization of Office. — (a) The Tanodbayan may select, appoint, and compensate in accordance with the Civil Service Law and within the amount available by appropriation, such assistants and employees in the national and local offices as he may deem necessary to discharge his responsibilities under this Decree;

(b) The Tanodbayan shall designate one of his Deputies to be the Senior Deputy Tanodbayan, with authority to act in his stead when he himself is disabled or protractedly absent;

(c) The Tanodbayan may delegate to other members of his Staff any of his authority or duties under this Decree except this power of delegation and the duty of formally making recommendations to administrative agencies or reports to the President or the National Assembly.

SECTION 9. Definitions. — As used in this Decree, the term

(a) “Administrative agency” means any department or other governmental unit including any government-owned or controlled corporation, any official, or any employee acting or purporting to act by reason of connection with the government but it does not include (1) any court or judge, or appurtenant judicial staff, (2) the members, committees, or staffs of the National Assembly, or (3) the President or his personal staff, or (4) the members of the Constitutional Commissions and their personal staffs.

(b) “Administrative act” refers to any action including decisions, omissions, recommendations, practices, or procedures of an administrative agency.

(c) “Failure of Justice” refers to the defeat of a particular right, of the failure of reparation for a particular wrong, from the lack or inadequacy of a legal remedy for the enforcement of the one or the redress of the other.

SECTION 10. Powers. — The Tanodbayan shall have the following powers:

(d) He may issue a subpoena to compel any person to appear, give sworn testimony, or produce documentary or other evidence the Tanodbayan deems relevant to a matter under his inquiry;

SECTION 11. Matters appropriate for investigation. — (a) In selecting matters for his attention, the Tanodbayan should address himself particularly to an administrative act that might be

1. contrary to law or regulation;

2. unreasonable, unfair, oppressive, or inconsistent with the general course of an administrative agency’s functioning;

3. mistaken in law or arbitrary in ascertainments of facts;

4. improper in motivation or based on irrelevant consideration;

5. unclear or inadequately explained when reasons should have been revealed;

(b) The Tanodbayan may concern himself also with strengthening procedures and practices which lessen the risk that objectionable administrative acts will occur.

SECTION 12. Action on complaints. — (a) The Tanodbayan may receive a complaint from any source concerning an administrative act. At no expense to the complainant, he shall conduct a suitable investigation into the things complained of unless he believes that

1. the complainant has available to him another remedy or channel of complaint which he could reasonably be expected to use;

2. the grievance pertains to a matter outside the Tanodbayan’s power;

3. the complainant’s interest is insufficiently related to the subject matter;

4. the complainant is trivial, frivolous, vexations, or not made in good faith;

5. other complaints are more worthy of attention;

6. the Tanodbayan’s resources are insufficient for adequate investigation; or

7. the complaint has been too long delayed to justify present examination of its merits.

(b) After completing his consideration of a complaint, whether or not it has been investigated, the Tanodbayan shall suitably inform the complainant and, when appropriate, the administrative agency or agencies involved.

(c) A letter to the Tanodbayan from a person in a place of detention or in a hospital or other institution under the control of an administrative agency shall be immediately forwarded, unopened, to the Tanodbayan.

SECTION 13. Consultation with agency. — Before announcing a conclusion or recommendation that criticizes an administrative agency or any person, the Tanodbayan shall consult with that agency or person.

(b) If the Tanodbayan believes that an administrative action has been dictated by laws whose results are unfair or otherwise objectionable, he shall bring to the notice of the National Assembly his views concerning desirable statutory change.

SECTION 15. Publication of recommendations. — The Tanodbayan may publish his conclusions, recommendations, and suggestions by transmitting them to the President, the National Assembly, or any of its committees, the press, and others who may be concerned. When publishing an opinion adverse to an administrative agency or official he shall, unless excused by the agency or official affected, include the substance of any statement the administrative agency or official may have made to him by way of explaining past difficulties or present rejection of the Tanodbayan’s proposals.

SECTION 16. Reports. — In addition to whatever reports he may make from time to time, the Tanodbayan shall on or about August 15 of each year report to the National Assembly and to the President concerning the exercise of his functions during the preceding calendar year. This report shall be published in the Official Gazette and copies thereof shall be furnished the provincial governors and city mayors. In discussing matters with which he has dealt, the Tanodbayan need not identify those immediately concerned if to do so would cause needless hardship. So far as the annual report may criticize named agencies or officials, it must also include the substance of their replies to the criticism.

SECTION 17. Prosecution of public personnel. — If the Tanodbayan has reason to believe that any public official, employee, or other person has acted in a manner resulting in a failure of justice, he shall file and prosecute the corresponding criminal, civil, or administrative case before the Sandiganbayan or the proper court or body.

SECTION 18. Tanodbayan’s immunities. — (a) No proceeding, opinion, or expression of the Tanodbayan or any member of his staff, shall be reviewable in any court;

(b) No civil action shall lie against the Tanodbayan or any member of his staff or anything done or said or omitted, in discharging the responsibilities contemplated by this Decree;

(c) Neither the Tanodbayan or any member of his staff shall be required to testify or produce evidence in any judicial or administrative proceeding concerning matters within his official cognizance, except in a proceeding brought to enforce this Decree.

SECTION 19. Rights and duties of witnesses. — (a) A person required by the Tanodbayan to provide information shall be paid the same fees and travel allowances as are extended to witnesses whose attendance has been required in the course of first instance.

(b) A person who, with or without service of compulsory process, provides oral or documentary information requested by the Tanodbayan shall be accorded the same privileges and immunities as are extended to witnesses in the courts, and shall also be entitled to be accompanied and advised by counsel while being questioned.

(c) If a person refuses to respond to the Tanodbayan’s subpoena, refuses to be examined or engages in obstructive misconduct, the Tanodbayan shall certify the facts to the Sandiganbayan or the court of first instance. The court shall thereupon issues an order directing the person to appear before the court to show cause why he should not be punished as for contempt. The order and copy of the Tanodbayan’s certified statement shall be served on the person. Thereafter the court shall have jurisdiction of the matter. The same proceedings shall be had, the same penalties may be imposed, and the person charged may purge himself of the contempt in the same way as in the case of a person who has committed a contempt in the trial of a civil action before the court.

SECTION 21. Relation to other laws. — Republic Act No. 6028 is hereby repealed; but otherwise, the provisions of this Decree are in addition to and do not in any manner limit or affect the provisions of any other enactment under which any remedy or right of appeal is provided for any person, or any procedure is provided for the inquiry into or investigation of any matter. The powers conferred on the Tanodbayan may be exercised notwithstanding any provision in any enactment to the effect that any administrative action shall be final or unappealable.

SECTION 22. Appropriation. — There are hereby authorized to the appropriated such sums as may be necessary to carry out the provisions of this Decree, and thereafter to be included in the general appropriation act.

DONE in the City of Manila, this 11th day of June, in the year of Our Lord, Nineteen Hundred and Seventy-Eight.