ESTABLISHING AN EXCLUSIVE ECONOMIC ZONE AND FOR OTHER PURPOSES

WHEREAS, an exclusive economic zone extending to a distance of two hundred nautical miles from the baselines from which the territorial sea is measured is vital to the economic survival and development of the Republic of the Philippines;

WHEREAS, such a zone is now a recognized principle of international law; 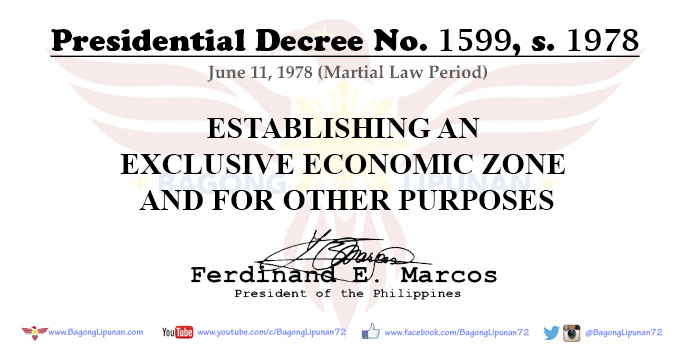 NOW, THEREFORE, I, FERDINAND E. MARCOS, President of the Philippines, by virtue of the powers vested in me by the Constitution, do hereby decree and order:

Section 2. Without prejudice to the rights of the Republic of the Philippines over it territorial sea and continental shelf, it shall have and exercise in the exclusive economic zone established herein the following;

(a) Sovereignty rights for the purpose of exploration and exploitation, conservation and management of the natural resources, whether living or non-living, both renewable and non-renewable, of the sea-bed, including the subsoil and the superjacent waters, and with regard to other activities for the economic exploitation and exploration of the resources of the zone, such as the production of energy from the water, currents and winds;

(b) Exclusive rights and jurisdiction with respect to the establishment and utilization of artificial islands, off-shore terminals, installations and structures, the preservation of the marine environment, including the prevention and control of pollution, and scientific research;

(c) Such other rights as are recognized by international law or state practice.

(a) explore or exploit any resources;

(b) carry out any search, excavation or drilling operations:

(d) construct, maintain or operate any artificial island, off-shore terminal, installation or other structure or device; or

(e) perform any act or engage in any activity which is contrary to, or in derogation of, the sovereign rights and jurisdiction herein provided.

Nothing herein shall be deemed a prohibition on a citizen of the Philippines, whether natural or juridical, against the performance of any of the foregoing acts, if allowed under existing laws.

Section 4. Other states shall enjoy in the exclusive economic zone freedoms with respect to navigation and overflight, the laying of submarine cables and pipelines, and other internationally lawful uses of the sea relating to navigation and communications.

Section 5. (a) The President may authorize the appropriate government office/agency to make and promulgate such rules and regulations which may be deemed proper and necessary for carrying out the purposes of this degree.

(b) Any person who shall violate any provision of this decree or of any rule or regulation promulgated hereunder and approved by the President shall be subject to a fine which shall not be less than two thousand pesos (P2,000.00) nor be more than one hundred thousand pesos (100,000.00) or imprisonment ranging from six (6) months to ten (10) years, or both such fine and imprisonment, in the discretion of the court. Vessels and other equipment or articles used in connection therewith shall be subject to seizure and forfeiture.

Section 6. This Decree shall take effect thirty (30) days after publication in the Official Gazette.

Done in the City of Manila, this 11th day of June, in the year of Our Lord, nineteen hundred and seventy-eight.