RECONSTITUTING THE NATIONAL GRAINS AUTHORITY TO THE NATIONAL FOOD AUTHORITY, BROADENING ITS FUNCTIONS AND POWERS AND FOR OTHER PURPOSES.

WHEREAS, it is imperative to strengthen National strategy for the integrated growth and development of the food industry to insure adequate and continuous supply at reasonable prices;

WHEREAS, the functions and powers of the National Grains Authority, created under P.D. No. 4 as amended by P.D. No. 699 and 1485, are limited to the grains industry;

WHEREAS, integrated growth and development of the entire food industry requires the expansion of the functions and powers of the National Grains Authority to cover other basic food commodities; 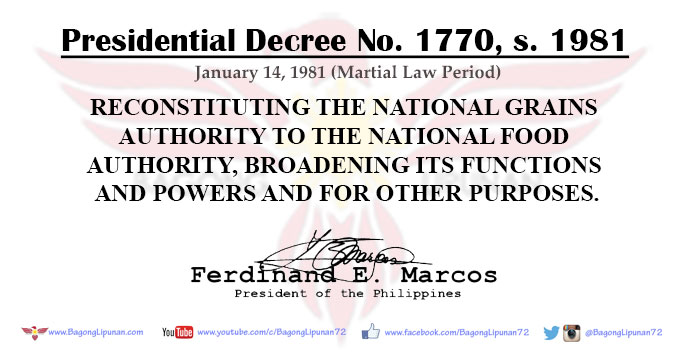 NOW, THEREFORE, I, FERDINAND E. MARCOS, by virtue of the powers vested in me by the constitution, do hereby Order and Decree:

Section 1. Short Title. This Decree shall be known as the National Food Authority Act.

Section 2. Declaration of Policy. It shall be the declared policy of the State to promote the integrated growth and development of the food industry so it can adequately function as an institution conscious of its social responsibilities, capable of maintaining an adequate and continuous food supply and contributing its proper share to the economy.

Section 4. Scope. As used in this Decree, the term “Food Industry” shall include, in addition to those enumerated in Section 2 of Presidential Decree No. 4, as amended, raw/fresh and/or manufactured/processed/packaged food products.

Section 6. Composition of the National Food Authority Council. The Council shall be composed of the following:

The Minister of Human Settlements

The Minister of Agriculture

The Minister of Finance

The Minister of Industry

The Minister of Trade

The Governor, Central Bank of the Philippines

The Chairman, Development Bank of thePhilippines

The President, Land Bank of the Philippines

A Representative of the Office of the President

The Council shall meet regularly at least once a month on any date to be determined by the Chairman. Provided: That the Chairman may convene special meetings to discuss urgent matters. The Council Members shall be entitled to per diem of not less than EIGHT HUNDRED PESOS (P800.00) for each meeting actually attended by them and such other remuneration as may be determined by the Council.

The Management of the Authority shall be vested in an Administrator who shall have the rank of a Minister and shall be assisted by two (2) Deputy Administrators and as many Assistant Administrators as may be determined by the Council and whose respective qualifications shall be the same as those provided for in the said Decree.

The Administrator shall receive a compensation, to be determined by the Council in accordance with the provisions of pertinent compensation law.

(a) To acquire ownership of, by purchase or otherwise, and/or to invest in, hold, sell or otherwise dispose of, stocks or bonds or any interest in either, or any obligation or evidence or indebtedness of any corporation, public or private, domestic or foreign, or the bonds or other obligations or evidence of indebtedness of any person, firm or corporation.

(b) To register, license and supervise persons, natural or juridical, who shall engage or are engaging in the wholesale, retail, processing, manufacturing, storage, transporting, packaging, importation, exportation of food products/commodities and such other related to food activities and to prescribe, impose and collect fees, charges and/or surcharges, with the approval of the President of the Philippines upon recommendation of the Council.

(c) To import/export or cause the importation/exportation of food products/commodities and/or raw materials, equipment and facilities needed in the manufacture/processing of food commodities as may be determined by the Council, and as approved by the President of the Philippines.

(d) To establish or cause the establishment of branches or agencies, domestic or foreign, whenever deemed necessary by the Council.

(e) To engage in the production, manufacturing, processing and/or packaging of food products/commodities as may be necessary to effectively carry out its functions and as approved by the President of the Philippines.

(f) To establish and or re-structure its own internal organization and to fix the remunerations, emoluments, allowances and other fringe benefits of its officers and employees, subject to the provisions of pertinent compensation law and regulations.

(g) To create and establish, a “Provident Fund” which shall consist of contributions made both by the Authority and its officers and employees to a common fund for the payment of retirement and other benefits to such officers and employees or their heirs under such terms and conditions as the Council may fix.

(h) The subsidiaries of the Authority and those which may be subsequently acquired and/or hereinafter created by law and/or owned/controlled and/or organized by the Authority shall enjoy the tax exemptions and other privileges and rights of the Authority when specifically approved by the President of the Philippines.

Section 8. Food Terminal, Inc. The investments and loans, as well as related obligations incurred, of the Human Settlements Development Corporation in the Food Terminal, Inc. shall be transferred to the Authority, at such valuation as may be approved by the President of the Philippines upon recommendation of the Commission on Audit.

The terms of payment for net assets transferred shall be as mutually agreed upon.

Section 9. Capitalization. The Authority shall have an authorized capital stock of five billion pesos, divided into fifty million shares of par value of one hundred pesos each. These shares shall be wholly subscribed and paid by the national government, local government units, or other government owned or controlled corporations.

The accumulated capital stock and surpluses of the National Grains Authority shall be evaluated and shall be the initial paid in capital of the Authority. The national government shall make additional equity investments into the Authority out of funds appropriated in the General Appropriations Act and other appropriations laws as may be approved by the President in accordance with the fund requirements of the Authority and funds availability in the Treasury.

(a) Official development assistance to the Philippine government are channeled through the Authority, including food aid, shall be recorded on the books of the Authority as paid in capital when received in the form of loans, except where otherwise approved by the President of the Philippines, in which case they may be recorded as subsidies to the Authority.

(c) The national government may subsidize the operations of the Authority out of funds appropriated in the annual appropriations Acts, in such amount and at such times as approved by the President of the Philippines.

(d) The funding and organizational provisions in B.P. No. 80 intended for the national food programs, including those provided as special financing program seed fund, cooperatives loans, livelihood projects, in the Ministry of Agriculture, the Ministry of Natural Resources, the Office of the President, the Ministry of Human Settlements shall be reviewed by the Council, which shall recommend to the President the appropriations transfers and realignment of responsibilities in order to be consistent with the purposes of this Decree. Appropriations transferred shall form part of the equity investment into the Authority. These review shall be conducted with the participation of the Chairman, Presidential Commission on Reorganization and the Minister of the Budget.

(e) The Authority is hereby empowered to negotiate with the government and domestic private lending institutions for credit facilities at preferential rates.

(f) The Central Bank of the Philippines shall rediscount local procurement and importation of papers of the National Food Authority under such terms and conditions as may be determined by the Monetary Board, which shall give preferential treatment as to interest rate, maturity and loan value.

Section 13. Repealing Clause. All laws, orders and proclamations, rules and regulations, or parts thereof, inconsistent with the provisions of this Decree are hereby repealed, amended or modified accordingly.

Done in the City of Manila, Philippines, this 14th day of January in the year of Our Lord, nineteen hundred and eighty-one.