WHEREAS, the United Nations Charter in its Preamble expresses a reaffirmation of faith in fundamental human rights, in the dignity and worth of the human person, in the equal rights of men and women and of nations large and small;

WHEREAS, the United Nations General Assembly Resolution 39/104 of 14 December 1984 encourages all member states to take appropriate steps for the establishment or, where they already exist, the strengthening of national institutions for the protection and promotion of human rights;

WHEREAS, the United Nations General Assembly Resolution 39/145 recognizes that the human being is the main subject of development and that everyone has the right to participate, as well as to benefit from the development process;

WHEREAS, the United Nations General Assembly Resolution 39/145 further emphasizes the profound conviction that all human rights and fundamental freedoms are indivisible and interdependent and that equal attention and urgent consideration should be given to the implementation, promotion and protection of both civil and political and economic, social and cultural rights;

WHEREAS, the Philippines is a signatory to almost all UN Conventions on human rights and continues to comply with its commitments under such international agreements;

WHEREAS, the Constitution of the Republic of the Philippines unequivocably promote social justice and the promotion of human rights irrespective of race, color, creed and origin;

WHEREAS, the policies of the Government as reflected in its Four-Year Development Plans fully recognize social concerns in the national goals for sustainable economic growth, equitable distribution of the fruits of development, and total human development;

WHEREAS, the current efforts of the Government to promote human rights such as the activities of the Special Investigation Committee need to be fully coordinated with and integrated into the overall strategies and policies to implement the national goals; 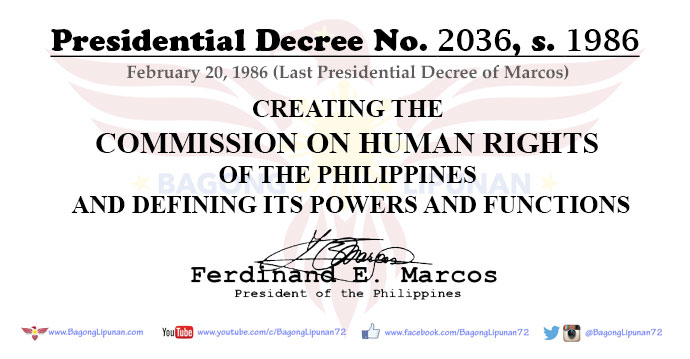 NOW, THEREFORE, I, FERDINAND E. MARCOS, President of the Philippines, by virtue of the powers vested in me by the Constitution and the authority vested in me by Presidential Decree No. 1416, as amended, hereby order and ordain:

SEC. 2. Composition. The Commission shall be composed of the following:

A. From the Government Sector –

B. From the Private Sector –

SEC. 3. Secretariat. The Office of the Vice President shall provide the secretariat services for the Commission.

SEC. 4. Functions. The Commission shall have the following functions:

a. Prepare an integrated program designed to protect human rights in the country.

b. Plan and coordinate all activities relevant to the protection of human rights in the country;

c. Supervise the implementation of all plans and programs relevant to human rights in political, economic, civil, social and educational fields;

d. Receive and disburse funds allocated for the Commission;

e. Undertake continuing evaluation of all activities related to the protection of human rights;

f. Undertake studies, particularly in the light of the Universal Declaration of Human Rights, concerning the prevention of any discrimination against human rights and fundamental freedoms; and

g. Perform such other functions as may be necessary for the protection of human rights and the advancement of social justice in the country.

a. Call upon Government Ministries and agencies, including Local Governments, to assist it in the implementation of its functions;

b. Promulgate, implement and enforce the policies of the government relevant to the promotion and protection of human rights;

c. Review, coordinate, integrate and approve resolutions, rules and regulations, and decisions adopted or promulgated by various agencies or bodies on matters concerning the promotion of human rights;

d. Act as the custodian of all files and records pertaining to violations against human rights;

e. Grant allowances and per diems or fix the salaries of officials and the staff it may employ, in accordance with existing laws, rules, and regulations.

SEC. 7. The Commission shall constitute itself immediately and shall exist for five (5) years from the issuance of this Decree, unless earlier abolished by the President of the Republic of the Philippines.

SEC. 8. Repealing Clause. All laws, decrees, orders, proclamations, rules, regulations, or parts thereof, which are inconsistent with any of the provisions of this Presidential Decree are hereby repealed or modified accordingly.

SEC. 9. Separability Clause. Any portion or provision of this Presidential Decree that may be declared unconstitutional shall not have the effect of nullifying the other provisions thereof; provided, that such remaining portions can still stand and be given effect in their entirety to accomplish the objectives of this Decree.

DONE in the City of Manila, this 20th day of February in the year of our Lord, nineteen hundred and eighty-six.