GRANTING EMERGENCY COST OF LIVING ALLOWANCE TO EMPLOYEES OF THE NATIONAL GOVERNMENT AND APPROPRIATING THE NECESSARY FUNDS THEREOF.

WHEREAS, worldwide inflation primarily brought about by the energy crisis has resulted in the tremendous increase of domestic prices in particular and the cost of living in general;

WHEREAS, the increase in prices, especially of basic or prime commodities, has caused undue hardships among that segment of our people belonging to the low income or salary group in the public as well as private sector of the economy;

WHEREAS, there is need to alleviate the plight of the members of this low income group in order to provide them with the means to cushion the impact of increased prices on their daily lives;

WHEREAS, the needed measures to aid and assist the low income group initiated by the Government should set an example and suggest to the private sector to undertake measures of their own for the same purpose; 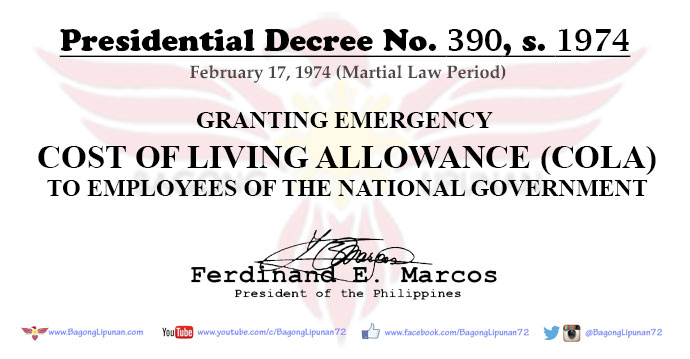 NOW, THEREFORE, I, FERDINAND E. MARCOS, President of the Philippines, by virtue of the powers vested in me by the Constitution as Commander-in-Chief of all the Armed Forces, and pursuant to Proclamation No. 1081, dated September 21, 1972, and General Order No. 1, dated September 22, 1972, as amended, do hereby order and decree the following as part of the law of the land:

Section 1. Any provision of law, decree, executive order, letter of instruction, or rule or regulation to the contrary notwithstanding, all employees of the National Government whose salaries or wages are less than or below six hundred pesos (P600) per month shall be given, in addition to their respective salaries or wages, the amount of fifty (P50) per month as emergency cost of living allowance: Provided, That, no employee covered by this emergency allowance scheme shall, by reason of the receipt of this allowance, receive more than six hundred pesos (P600) per month as straight time pay.

Section 2. So much amount as is necessary to pay the emergency cost of living allowance and the adjustment as provided for in the preceding section is hereby appropriated.

Section 3. This Decree shall take effect and shall be implemented immediately.

Done in the City of Manila, this 17th day of February, in the year of Our Lord, nineteen hundred and seventy-four.