CREATING THE MANILA TRANSIT CORPORATION, APPROPRIATING FUNDS THEREFORE AND FOR OTHER PURPOSES

WHEREAS, the proliferation of independent road transportation utility operators in Metropolitan Manila has not provided the commuting public with adequate and responsive service;

WHEREAS, this condition cannot improve the urban public transport system when it tolerates destructive competition and other structural diseconomies in public utility operations rather than encourage or institute the integration, or consolidation of resources, management and operations to achieve economy and efficiency;

WHEREAS, there is, then an urgent need for the Government to intervene and institute through an appropriate instrumentality the rationalization of the transportation system in Metropolitan Manila; 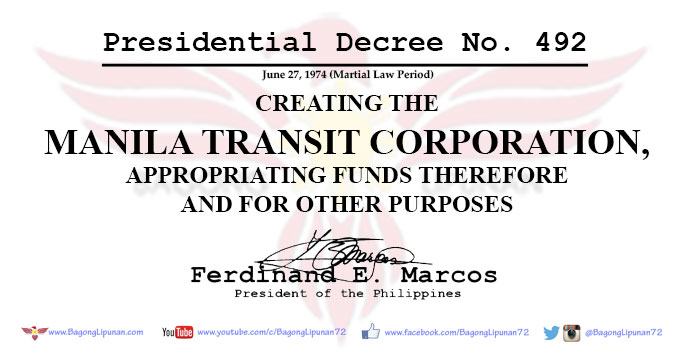 NOW, THEREFORE, I, FERDINAND E. MARCOS, President of the Philippines, by virtue of the powers in me vested by the Constitution as Commander-in-Chief of all the Armed Forces of the Philippines and pursuant to Proclamation No. 1081, dated September 21, 1972, and General Order No. 1, dated September 22, 1972 as amended, do hereby order and decree the creation and organization of a Manila Transit Corporation, to be governed by this decree and its by-laws in accordance with the following:

Section 1. Declaration of Policy. It is hereby declared to be the policy of the state to rationalize and integrate public transportation services in order to attain the following objectives:

1. To integrate public transportation operations in Metropolitan Manila (herein used as defined by the Bureau of Census and Statistics) into one corporate entity such that the operators, with franchises to operate within the area, transfer their assets involved in the transport business in exchange for equity participation in the corporation.

2. To establish and operate an integrated public transportation system in Metropolitan Manila which will: (1) eliminate destructive competition and service duplication among different transport modes and firms; (2) rationalize route allocation and provide proper balance of commuter service in all routes; (3) effect economies in operations and overhead facilities and logistics support; (4) develop a financially strong and operationally efficient metropolitan transport firm; (5) work towards the standardization of rolling stock equipment and other facilities in order to satisfy the requirements of the riding public.

Section 3. Corporate Powers. The Corporation shall have the power:

a) to prescribe its by-laws;

b) to adopt, alter and use a corporate seal;

c) to make contracts and to sue and be sued;

d) to own real or personal property and to sell, mortgage or otherwise dispose of the same;

e) to employ such officers and personnel as may be necessary to carry on its business;

f) to acquire rolling stocks, repair and maintenance equipment, and other facilities;

g) to manage and operate a public transport system within Metropolitan Manila in accordance with the above-stated policy objectives:

h) to establish, manage or operate related activities and facilities, such as transport infrastructures, terminal facilities, parking areas, and the like, subject to the approval of the appropriate government authorities;

i) to contract loans, credits in any convertible foreign currency or capital goods, and indebtedness from time to time from foreign governments, or any international financial institutions or funds sources or to issue bonds, the total outstanding amount of which, exclusive of interest, shall not exceed Five Hundred Million United States Dollars or the equivalent thereof in other currencies, on such terms and conditions as it shall deem appropriate for the accomplishments of its purposes and to enter into and execute agreements and other documents specifying such terms and conditions.

The President of the Philippines, by himself, or through his duly authorized representative, is hereby authorized to negotiate and contract loans with foreign governments or any international financial institution of fund source, in the name and on behalf of the corporation, for the accomplishment of its purposes.

The loans, credits and indebtedness contracted under this subsection and the payment of the principal, interest and other charges thereon, as well as the importation of machineries equipment, materials, supply and services, by the Corporation, paid from the proceeds of any loan, credit for indebtedness incurred under this Act, shall also be exempt from all direct and indirect taxes, fees imports and other charges and restrictions, including import restrictions previously and presently imposed, and to be imposed by the Republic of the Philippines, or any of its agencies and political subdivisions.

j) to exercise the powers granted under this decree and such other incidental powers as may be necessary to carry on its business and the general powers mentioned in the Corporation Law, as amended, insofar as they are not inconsistent herewith.

Section 4. Authorized Capital Stock, Appropriation: The Corporation shall have a capital stock divided into three million voting and no par value shares to be subscribed, paid for and voted as follows:

(b) to assure early and gradual institution of an integrated public transport system, the Corporation is hereby authorized to sell the remaining one million voting and no par shares to persons or entities operating public utility vehicles in Metropolitan Manila Area at issue values to be determined by the Board of Directors.

Each share of stock shall represent one vote and any agreement, contract, arrangement scheme or plan that shall transfer ownership and voting rights over the shares such that the public corporate nature of the corporation shall be impaired or removed is hereby prohibited.

Section 6. Functions and Duties of the Board of Directors.

1. The Board shall appoint and fix the salaries of a General Manager and such other affiliates as may be necessary for the international administration of the Corporation.

2. The Board shall establish such number of Divisions in the Corporation as may be necessary for the accomplishment of its corporate purposes.

3. The Board shall submit to the President of the Philippines and shall publish an annual report of the condition of the Corporation before the end of February of each year.

Section 8. Exemptions. All positions of the Corporation whether technical, administrative, professional, or managerial, are exempt from the provisions of the Civil Service Law and the rules and regulations of the Wage and Position Classification Office, and shall be governed only by the personnel management policies set by the Board of Directors, provided further that all personnel shall be entitled to the benefits and privileges normally accorded to government employees.

Section 9. Implementing Rules. The Secretary of Public Works, Transportation and Communication shall within the (30) days from the date of his appointment, call for an organizational meeting of the Board in order that Corporate business may forthwith be commenced.

Done in the City of Manila, this 27th day of June, in the year of Our Lord, Nineteen Hundred and Seventy-Four. 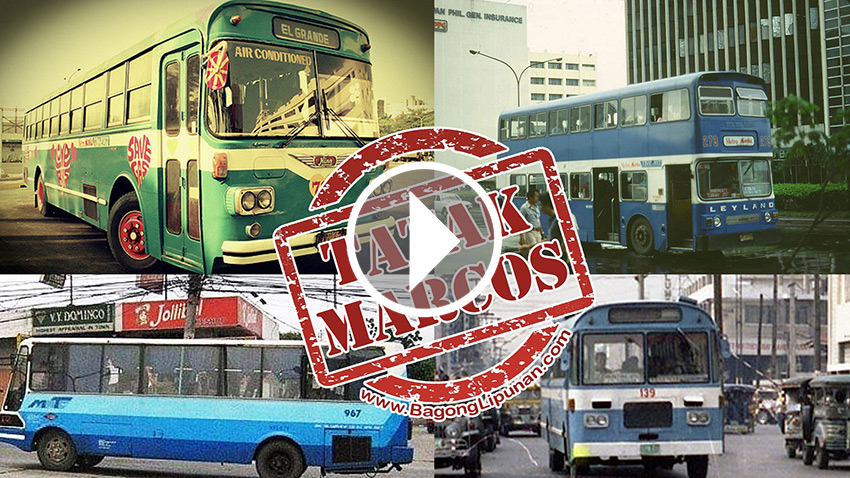