WHEREAS, during the referendum of February 27, 1975, the youth throughout the land has cogently displayed their zeal and capability to, as they did actually, participate in the ventilation of vital issues, both local and national, affecting their welfare and the future of this country;

WHEREAS, it has been noted that the present setup of the barangays under enabling Acts and/or Decrees, has proved, to a great extent, inadequate to assign to the youth of each and every barangay a definite role as well as afford them a medium to effectively express their views and opinions on issues of transcendental significance;

WHEREAS, such barangay youth, if afforded each and every opportunity for expression, would tremendously contribute toward an expeditious and clear ascertainment of the actual, genuine, legitimate and valid expression of the will of the people; and

WHEREAS, it would only be by giving them a definite role and affording them ample opportunity to express their views that a complete cross-section of the will of the populace could be accurately determined thereby providing a more democratic and popular basis for legislation and/or other governmental operations; 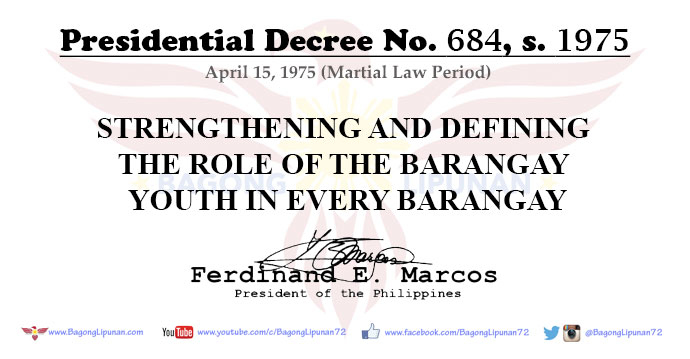 NOW, THEREFORE, I, FERDINAND E. MARCOS, President of the Philippines, by virtue of the powers vested in me by the Constitution, de hereby decree as part of the law of the land, the following:

Section 1. There shall be in every barangay throughout the land a barangay youth organization to be known as “Kabataang Barangay” composed of all residents therein who are less than eighteen years of age.

Section 2. The affairs of said barangay youth organization shall be administered by a barangay youth chairman together with six (6) barangay youth leaders, all of whom shall be at least fifteen years of age or over but less than eighteen and actual residents of the particular barangay. They shall be chosen by the barangay youth assembly from among its members at a meeting called for the purpose.

Section 4. The barangay youth assembly shall be composed of the residents of the barangay who are at least fifteen years of age or over but less than eighteen and who are registered in the barangay list contemplated by Section Four of Presidential Decree Numbered Two Hundred and Ten dated June eight, nineteen hundred and seventy-three.

Section 5. The barangay captain of the particular barangay shall have general supervision over the affairs of the barangay youth organization (Kabataang Barangay).

Section 6. The Secretary of Local Government and Community Development shall promulgate such rules and regulations as may deemed necessary to effectively implement the provisions of this Decree.

Section 7. All provisions of laws, orders, and decrees as well as rules and regulations inconsistent herewith are hereby repealed and/or modified accordingly.

Section 8. Nothing in this Decree, however, shall be construed as depriving the barangay youth of any and all rights, duties and responsibilities, vested or imposed upon them, under existing laws.

DONE in the City of Manila, this 15th day of April, in the year of Our Lord, nineteen hundred and seventy-five.