CALLING A NATIONAL REFERENDUM ON OCTOBER 16, 1976; PROVIDING FOR A PERIOD OF EDUCATIONAL AND INFORMATION CAMPAIGN ON THE ISSUES; AND ESTABLISHING THE MECHANICS AND MANNER FOR THE HOLDING THEREOF.

WHEREAS, on various occasions the people have invariably expressed opposition to the convening of the interim National Assembly;

WHEREAS, such opposition of the people to the convening of the interim National Assembly has resulted in a constitutional stalemate which has suspended the political evolution of the nation as sought by the President, especially with respect to his wish to have a legislative assembly with certain powers;

WHEREAS, the barangays and sanggunian assemblies through their duly authorized instrumentalities have recommended that the feasibility of abolishing and replacing the interim National Assembly be studied and in connection therewith to ascertain the wishes of the people as to the means that may be availed of to attain the objective;

WHEREAS, furthermore, the barangays have manifested their wish to submit anew for the people’s resolution the question of continuing martial law, obviously in the light of recent developments affecting the security of the state; 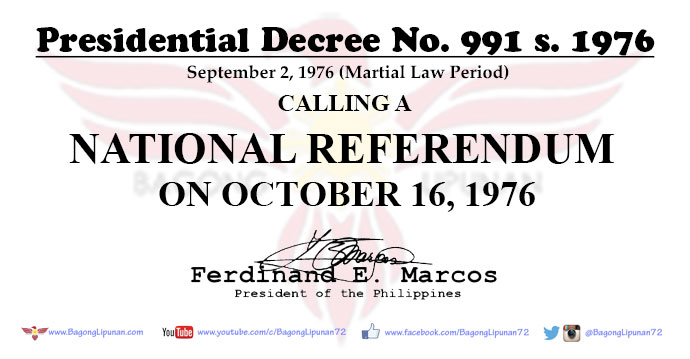 NOW, THEREFORE, I, FERDINAND E. MARCOS, President of the Philippines, by virtue of the powers vested in me by the Constitution, do hereby decree:

Section 1. National Referendum. Every barangay throughout the land shall, on October 16, 1976, hold a referendum and/or consultation in the manner herein provided to resolve the issues enumerated in section three of this Decree.

Section 2. Supervision and Control. The Commission on Elections shall, in addition to the powers and functions conferred upon it by the Constitution, exercise supervision and control over the conduct and all the other processes of the referendum, including the balloting in appropriate cases, acclamation, canvass and proclamation of the results thereof.

Section 3. Issues to be resolved. Without prejudice to other matters that may be discussed, the barangays shall resolve the issues of martial law, the interim assembly, its replacement, the powers of such replacement, the period of its existence, the length of the period for the exercise of the President of his present powers and such other issues that may be certified by the President in another decree.

Section 5. Information and Educational Campaign. Every barangay shall hold assemblies or meetings any day between September 11 to October 15 for the purpose of informing or enlightening its members regarding the significance and meaning of the issues to enable them to cast their votes intelligently.

During the information and educational campaign, the barangays shall encourage free, full and constructive discussion and exchange of views on the issues, including the holding of meetings or rallies and to this end may enlist the assistance of knowledgeable persons from both public and private sectors to act as speakers or resource persons.

Section 6. Notice and Record of Information Meetings. The barangay captain or the president of the Kabataang Barangay shall notify the COMELEC Supervisory Panel of the holding of any meeting or assembly for educational or informative purposes. The Comelec Supervisory Panel shall send a representative to the assembly meeting.

The Comelec Supervisory Panel shall keep a complete record of such meetings in every barangay under its jurisdiction.

If by October 10, any barangay shall have failed to hold a meeting in accordance with the preceding section, the Comelec Supervisory Panel shall instruct the barangay officials concerned to comply with the provisions of this section, notifying the Department of Local Government and Community Development of such instruction.

If notwithstanding such instructions the barangay officials fail to hold meetings required herein, the Comelec Supervisory Panel shall take such steps as are appropriate and necessary to assure the holding of such meetings.

Section 7. Free Discussions and Debates on the Referendum Questions. Any person who is duly registered as a barangay member shall not be questioned, interrogated or investigated before or after the referendum for any speech, remark or statement in any discussion or debate intended to explain the referendum questions or to enlighten the people about the issues involved, or for any view for or against any or all of the questions made in public rallies or debates or in other forms of communication, radio or television, and such remarks, statement or views shall not be admissible as evidence in any investigation or suit against the person or persons making them.

“The printing of pamphlets, leaflets, posters, handbills and other printed materials designed to explain the referendum questions or to enlighten the people about them, and the dissemination or circulation of these materials shall be allowed and in no way restricted subject to pertinent and applicable provisions of the Election Code of 1971 and regulations that may be promulgated by the Commission on Elections in accordance with Section 5 of General Order No. 51, and no person who is duly registered as barangay member shall be held to account for view expressed in these printed materials which shall likewise be inadmissible as evidence in any investigation or suit against the person or persons printing, publishing or circulating them: Provided, however, That any printed material shall not be allowed to be disseminated or circulated if it does not indicate the name and address of the author thereof as well as the name and address of the printer.”

(2) Barangays with one hundred or more members shall conduct their referendum through the use of ballots, Provided, That barangays with less than one hundred members may decide to hold their consultation by acclamation.

Ballots shall be signed and countersigned at the back thereof by the representative of the Comelec Supervisory Panel, the Chairman of the Barangay Referendum Committee, and the President of the Kabataang Barangay or their duly authorized representatives.

Printed ballots duly authenticated in accordance with the preceding paragraph shall be in the custody of the Chairman of the barangay referendum committee until the day of the referendum.

For purposes of economy and convenience, barangays that are contiguous or belonging to the municipality or province may pool their resources together and have their ballots printed at the same time by one printing firm or entity.

Section 11. Supervisory Panels. There shall be in each city, municipality or municipal district a Comelec Supervisory Panel which shall composed of the Election Registrar or in his absence the city/municipal treasurer as Chairman with ranking public school teachers and other civil service employees of the city, municipality or municipal district as member to be appointed by the Chairman. The number of the members of each Supervisory Panel shall be determined by the election registrar or the city/municipal treasurer, as the case may be, depending on the size and number of barangays under its jurisdiction.

(a) Send a representative or representatives the number of which shall be determined depending on the size of the barangay, to supervise the consultations therein with power to decide questions relating to the right of any person to participate; to see to it that the meeting is conducted in a free, orderly and honest manner; and to submit a written report to the Comelec Supervisory Panel on the manner the consultation was held.

(b) Authorize postponements of scheduled consultations due to terrorism, natural calamities, or other similar causes.

(c) Organize a barangay referendum committee in case one has not been duly constituted or to appoint substitutes.

(d) Replace any member of the barangay referendum committee for violation of the rules and regulations issued by the Commission on Elections or instructions of the representative of the Comelec Supervisory Panel or for any irregularity committed in the performance of his duties.

(e) Recommend to the Commission of Elections the annulment of the results of the referendum in any barangay upon proof of the use of unauthorized ballots or for any other serious irregularity committed during the voting or the counting of the votes.

(f) To facilitate voting in barangays with big number of barangay members, the Comelec Supervisory Panel may authorize the establishment of as many voting centers as may be necessary, giving notice thereof to the Department of Local Government and Community Development in order that the corresponding barangay referendum committees may be constituted.

Section 13. Manner of Voting. The voting in the barangay may be conducted through the use of ballots or by acclamation. In barangays where ballots will be used, the member entitled to vote shall be given his ballot by the Chairman of the barangay referendum committee and shall be required to prepare his ballot in secret. After the voter has filled his ballot, he shall return the same to the Chairman who, in the presence and in the view of the voter and the members of the referendum committee, shall deposit the ballot in the proper ballot box.

A voter who is illiterate or physically unable to prepare the ballot by himself may choose a person of his confidence, preferably a relative by affinity or consanguinity within the fourth civil degree, to assist him in the preparation of his ballot.

Section 14. Preparation and Transmission of Results. Immediately after the votes are counted, the Barangay Referendum Committee shall prepare and certify two copies of the results of the voting in the barangay in the form prescribed for the purpose. The referendum results shall be prepared in two parts, namely: Part One which shall contain the results for voters who are fifteen years of age and under eighteen, and part two which shall contain the results for voters who are eighteen years of age and over. The referendum results shall indicate the date of the voting, the name of the barangay and the city, municipality or municipal district and province where the barangay is situated, the number of members who voted, the total or affirmative votes cast and the total number of negative votes cast including absentations for each issue submitted to the members of the barangay, writing out said numbers in words and in figures, the names and signatures of the Chairman and members of the Barangay Referendum Committee.

The original of the referendum results shall be transmitted to the Commission on Elections by the fastest available means, and the duplicate shall be delivered to the Secretary of the Department of Local Government and Community Development.

Section 16. Watchers. Civil, religious, youth and other similar organizations may designate not more than two watchers each, under written authority to be accredited by the Comelec Supervisory Panel, to observe the referendum and the canvass of the results of the National Board of Canvassers.

Section 17. Assistance of Other Instrumentalities and Agencies of the Government. To implement the provisions of this Decree, the Commission on Elections is hereby empowered to enlist the assistance and cooperation of the personnel and facilities of any office, agency or instrumentality of the Government, after due consultation with the respective heads thereof.

Section 18. Appropriations. The sum of Five Million Pesos is hereby appropriated out of any funds in the National Treasury not appropriated to carry out the purposes of this Decree.

Section 19. Promulgation of Rules and Regulations. The Commission on Elections shall promulgate such rules and regulations as are necessary to carry out the provisions of this Decree.

Done in the City of Manila, this 2nd day of September in the year of Our Lord, nineteen hundred and seventy-six.