The Failed Return of Marcos Wealth – For the record of history

As a former Secretary General of the United Nationalist Democratic Organization (UNIDO), I am quite familiar with many details (of MARCOS WEALTH) that remain unpublished.

One is regarding the last effort of former President Ferdinand E. Marcos (FEM) to create a foundation for the benefit of the Filipino people. On February 2, 1989, before FEM died, he called, through Imelda R. Marcos, Vice-President Doy Laurel to see him in a Hawaiian hospital where the dying President was confined. He gave Doy Laurel a letter addressed to President Corazon Aquino proposing that 90 percent of all his assets worldwide would be given to a foundation in trust for the Filipino people. The Marcos family would only retain 10 percent of those assets. If memory serves, there would only be three members of the Board of Trustees: 1) A representative of the Catholic Church to be appointed by the Vatican; 2) A board member to be appointed by the Philippine government; 3) A third board member representing the Marcos family. At that time, the late Don Enrique Zobel’s name was mentioned. I do not wish to go further since the best evidence is the letter itself of FEM addressed to PCA.

Unfortunately, the messenger of that letter of FEM, i.e., Vice-President Doy Laurel was never able or allowed to see the President (Cory Aquino) in Malacañang. And obviously, nothing came out of it because it was rejected by the President herself and or her advisers. Here’s a direct quotation from President Marcos to Doy:

“Please tell Mrs. Aquino to stop sending her relatives. They are proposing so many things, all I want is to die in my country. Tell her to let me come home. I will turn over 90 percent of all my worldly possessions to our people. I will ask only 10 percent for my family. That is much better than her relatives are proposing.” 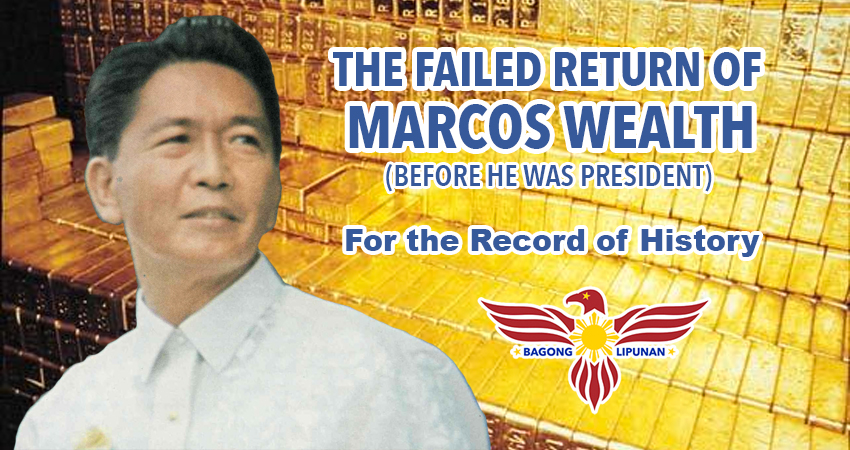 (Doy Laurel): “I thought of the so-called hidden wealth in favor of the Filipino people on a 90-10 basis that could solve so many of our problems including our foreign debt. It could even unite our nation! Upon reaching Manila, I immediately asked for an appointment with Cory but she would not see me. Here, I was her Vice President asking only for three minutes of her time to deliver a very important message from her predecessor and she would not see me. I was told she was busy.” (See Pages 186-187 of the book Doy Laurel by Celia Diaz Laurel)

I say what a lost opportunity where billions of pesos would have benefited the Filipino people. Now, after about 22 years, where are the said Marcos assets? As some wise guys know, a portion of it went to “trusted cronies” who now claim that they own said properties. Others have been taken over by the new power brokers, cronies, etc., after the EDSA revolution. Are the failed decisions of the old “Laban” the same agenda to be pursued by the new “Laban” in the event that they go back to power? I hope not.