The Philippines (A Fooled Nation)

I’m actually studying International Trade here in Busan . My Professor once said that one of the economic models of East Asia as well as the South during the post war era particularly in the 1960’s are based on Japan and the Philippines. He added that the Philippines is one of the richest nations next to Japan in that time and also once envied. Having said all these I was actually proud and happy seeing all my classmates of other nationalities looked at me with smiles on their faces. 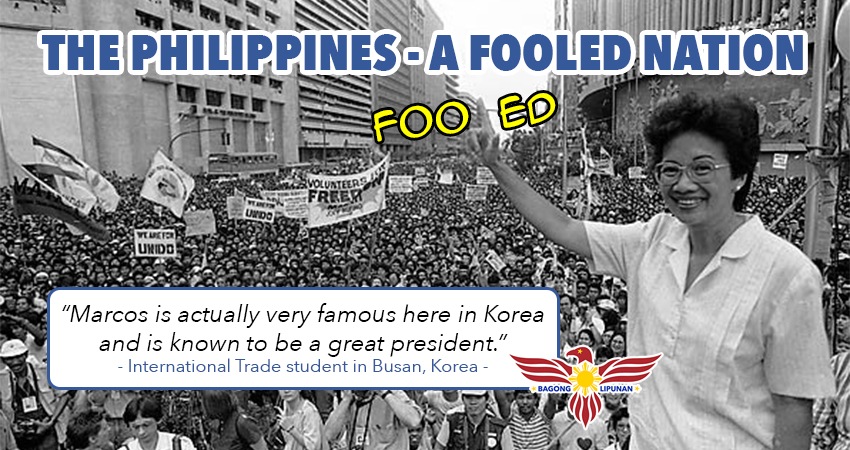 But, what struck me the most is when my professor asked me, WHAT HAPPENED TO YOUR COUNTRY? I couldn’t answer back. From this, I saw the sudden shift of emotions in the class. I went home having this in mind. I was quite puzzled of what really happened.

Then one day, my wife, a Korean national found a documentary about the late Pres. Marcos and his wife Imelda. He is actually very famous here in Korea and is known to be a great president.

In the documentary I saw a lot of things I couldn’t imagine happened during those days. I was surprised to see the prosperous and peaceful life the Filipinos back in those days were enjoying. I saw people wearing formal clothes (suits), a clean and magnificent city, happy people walking on the old streets of Manila, thriving communities and places everywhere and many more.

An interesting as well as quite controversial part of the documentary is the part wherein Bongbong Marcos was interviewed. He was asked, the same question my professor asked me, WHAT HAPPENED TO THIS COUNTRY? He said, “My father loved and cared for this country a lot and my mother as well. While saying this, suddenly he paused with teary eyes and said, “We were betrayed by the Americans”. He believes that his father trusted them but they put him down. He also thinks that they used his mother’s (Imelda) lifestyle to further destroy their reputation. Though he admitted she is living an extravagant life, she also did a lot of accomplishments, Cultural Center of the Philippines, Philippine Heart Center, Lung Center of the Philippines, Kidney Institute of the Philippines, Nayong Pilipino; Philippine International Convention Center, Folk Arts Theater, and the Coconut Palace are all Imeldas’ brainchildren. Nonetheless, all major social and public buildings and institutions in the country today were actually built during the Marcos’s reign.

What inspired me the most is the time when I heard the story of the late president of Korea Park Chung Hee who visited the Philippines once in the 1960’s. Mr. Marcos and Mr. Chung Hee were believed to be good friends. Pres. Chung Hee and Marcos once visited the Radial Road 8 now called North Luzon Expressway. I heard that Mr. Chung Hee literally cried on Mr. Marcos’ shoulder saying “ I wish my country would be just like the Philippines”. Right after he came back to Korea he started a plan to create expressways similar to what he saw in the Philippines to literally connect the cities all over Korea which were divided by tall mountains. He succeeded on doing this. And, it is said that this move is one of the keys of the Korean economic boom. Unluckily, he was assassinated. Some say that the Americans were behind the assassination.

I know Marcos cared for his country a lot that he wanted to put it on the map. He even bought properties at Wall Street at that time because he wanted the Philippines to be known and dominate the world market. He also initiated a group of powerful south East Asian nations (SEATO) and is believed to have been headed by the Philippines and some countries to strengthen their economic relations further which is also one of the models of economic integrations (G2, G3,G7, ASEAN, and so on) these days. Another international diplomatic accomplishment of Mr. Marcos was the joint effort of Japan and the Philippines to form the Asian Development Bank in 1966 with headquarter in Mandaluyong. Some say that it somewhat became just like the world bank of Asia and its sole purpose is to give foreign aid to poor countries at that time. Unfortunately, the Philippines is the one receiving aid nowadays.

But, not until the West came to realize that the Philippines will grow strong and powerful as time goes. Some say they were afraid it will take over the Wall Street as it already started buying properties and putting up state owned investment firms on its soil. One, thing is for sure, that they should stop this. Then it all began. They had their plan of destroying Marcos’ reputation and putting him down using the media and some manipulated social and political entities whose dark aim is to privatize Mr Marcos’ nationalistic legacies. The sad part is they succeeded.

And, the saddest part is, we were fooled as well. 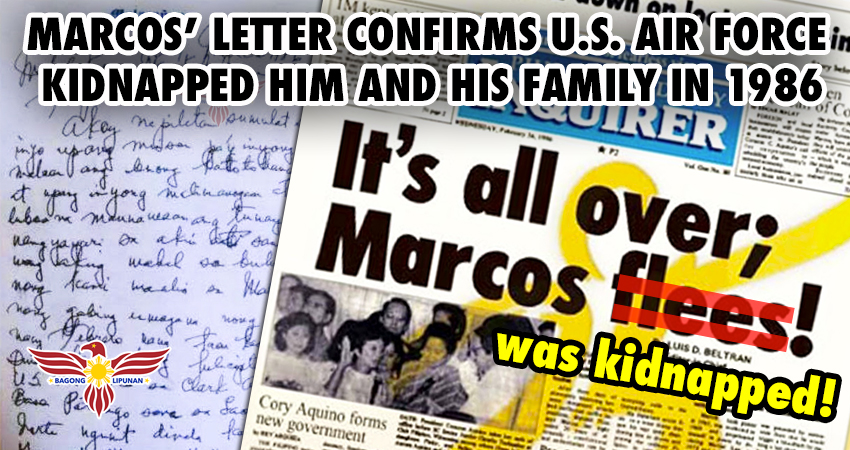